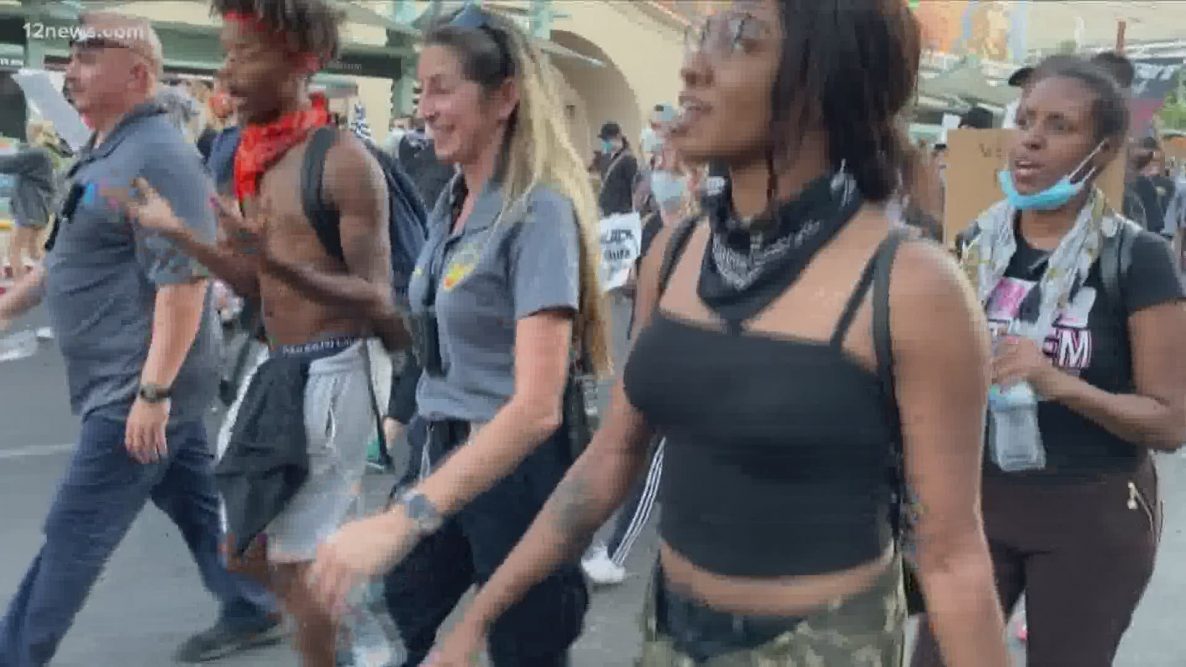 “These cops are starting to examine themselves and the system they are a part of.”

Really is that what’s going on. Sounds a bit moronic… What’s next defund the Phoenix Police Department?

This movement spreading like wildfire across the world is the spirit of anti-Christ. Every ungodly organization is stepping up and pouring out their form of death and despair upon the world. All under the guise equality, justice, and “New World Order. Sadly it’s here in Phoenix Arizona. I don’t want to mince words, this is Christ-rejecting mankind doing everything in opposition to the Word of God.

Only the power of the gospel can change hearts.

PHOENIX — Protests against racial injustice and police brutality continue across the country in the name of George Floyd – at times turning destructive with looters disrupting the peace. On Monday, several police officers joined protesters in both marching and kneeling as an act of solidarity. “Stand with us, kneel with us, we’re not trying to fight you. We are just trying to live,” said Reverend Redeem Robinson. Reverend Robinson captured the moment police knelt down with protesters during a Facebook Live video Monday night. Protesters made a deal with officers who were dressed in full tactical gear with protective shields, telling them if they take a knee, the group would obey Gov. Doug Ducey’s statewide curfew. “These cops are starting to examine themselves and the system they are a part of.” Earlier in the protest, 12 News captured officers marching with protesters. We asked protester Jadyn Ferguson what it meant for police to walk alongside her. “That’s them validating our feelings, saying the way I feel, how angry I am, they are saying we are there for you. We understand your pain. That means more to me than anything,” said Ferguson. In response to the harmony, Phoenix Police Chief Jeri Williams tweeted: “Moments like these are what unites us with our citizens. We hear you and will work toward creating a better community for us all to live in.” Reverend Robinson says the message of these protests goes beyond police just taking a knee. “We’re not just asking them to take a knee, we asking them to stop killing black, brown and indigenous people.”

Click here to view the original web page at www.12news.com

← Prev: Rioters Killed Retired Police Chief David Dorn, But No One is Protesting Over His Death Next: Arizona's Only Black Republican Law Maker Calls Black Lives Matter a Terrorist Organization →