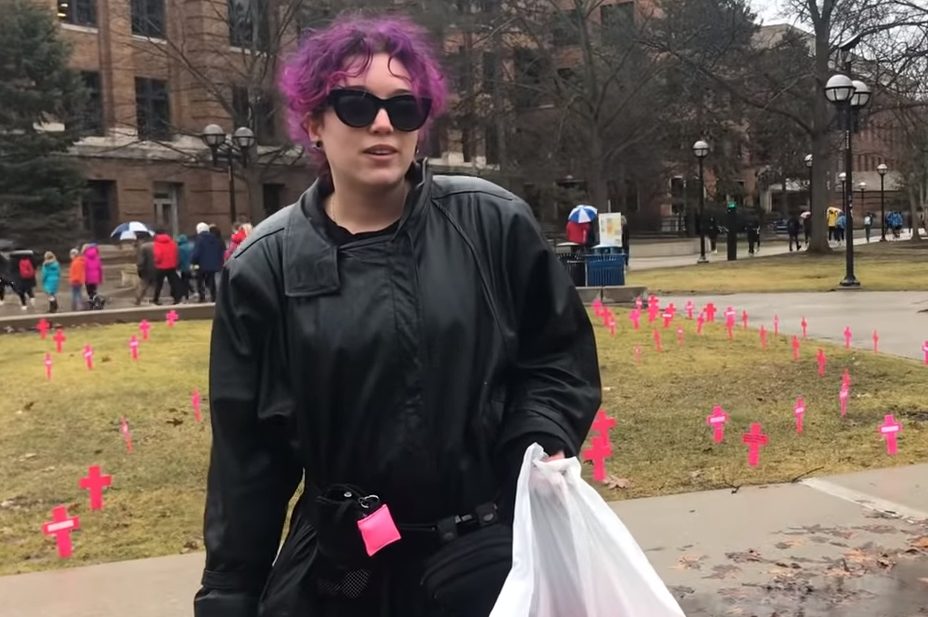 Last week, Students for Life at the University of Michigan, Ann Arbor, set up a Cemetery of the Innocents display on campus, to commemorate lives lost to abortion. The pink crosses are part of the spring #PlannedParenthoodTruth Tour on campus, where Students for Life groups are exposing the truth about Planned Parenthood’s poor track record on helping women. But, some angry pro-abortion activists were not happy that pro-lifers were practicing their free-speech rights.

Students for Life set up the 1,000 crosses around 9 AM, with permission from the school, on the Diag on campus and throughout the day pro-abortion activists, presumably students although that is unclear, kept pulling crosses out of the ground, placing them in trash bags, or putting them on top of trash cans. Around 12:50 PM, Kaylena Wiederhold, Students for Life’s Michigan Regional Coordinator, confronted several of the students and questioned them on why they were stealing Students for Life property.

Campus police were nearby supervising a climate change protest, when one student went to get them. Upon being approached by police officers, the students dropped the crosses and left.

Wiederhold noted, “Free-speech on college campuses continues to be an issue. The abortion activists on campus should be ashamed of themselves for trying to disrupt a peaceful memorial to not only babies harmed by abortion, but also women, men, and families harmed by abortion. We hope the University of Michigan will come out strongly in defense of free-speech on campus.”

This is why I’m glad @realDonaldTrump has promised to protect free-speech on campus from intolerant leftists. https://t.co/4S0OcoZBy9

You can see a map of vandalisms against pro-life groups on campus, primarily Students for Life groups, at https://studentsforlife.org/map/vandalism/.

Despite the vandalism, Kristan Hawkins has noted how pro-life students continue to fight for the preborn. In a Wall Street Journal op-ed about free-speech violations, Hawkins noted, “The silver lining in all this for pro-life advocates is the resolve of courageous students who refuse to be silenced and who are learning how to engage effectively and lovingly even in hostile environments. Far from being snowflakes, this generation is more pro-life than their parents, and they are willing to do the hard work of defending women and their preborn children no matter the obstacles.”

LifeNews Note:  Matt Lamb is director of communications with Students for Life of America. ← Prev: Two Catholic Priests Go Inside Abortion Clinics to Save Babies From Abortion Next: Beto O’Rourke Supports Third Trimester Abortions Without Any Limits →