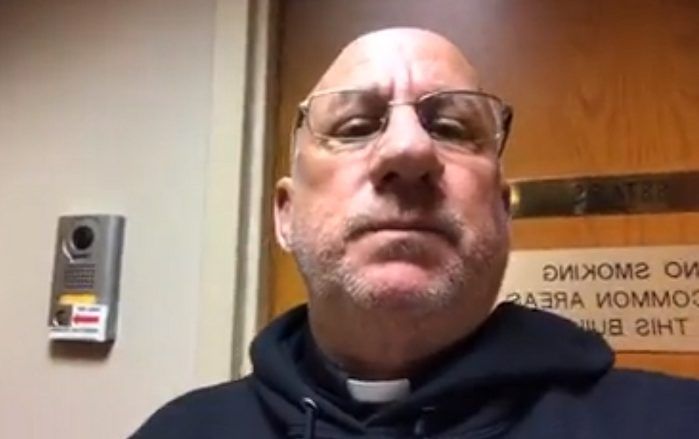 In what is known as Red Rose Rescues, the two priests and several pro-life advocates hand out Red Roses with messages attached to them about abortion alternatives and they and peacefully counsel women to save their babies from abortion.

“In doing so, each of the pro-lifers risk arrest for trespass and possible incarceration. They also prayerfully witness to moms, their escorts, the medical workers, and law enforcement who arrive on the scene. Several of the rescuers will remain in the facility until arrest, prayerfully joining in solidarity with the babies who will die in that location from abortion,” organizers told LifeNews this morning.

The suspected owner of Capital Women’s Services is Steve Brigham who has lost his medical license in six states and was charged in 2011 with 10 counts of murder in Maryland. This DC facility advertises abortions up to 36 weeks and has been the subject of complaints to DC’s Licensing Office of Health Equity for operating without all the required medical licenses. The abortion provider and director of Capital Women’s Services, Myron Rose, was disciplined by Maryland Board of Health for lying on his relicensing application in 2016.

Washington Surgi-Clinic is another of the 19 abortion facilities in the DC metropolitan area. Also known for providing later abortions, Cesare F. Santangelo, has a history of medical malpractice. Court documents obtained by Operation Rescue showed a 2011 medical malpractice/wrongful death lawsuit filed by the family of a women who died during an abortion.

A 2013 uncover video from Live Action indicate that Santangelo would leave a baby struggling for life to die after a failed abortion. “Hopefully we’ll get this pregnancy out intact, but it doesn’t always happen that way,” Santangelo tells an undercover Live Action investigator who is 24 weeks pregnant. “I try and sever the umbilical cord first, and we wait for that to stop pulsing, and this way the fetus is expired first.”

Once inside these abortion facilities, pro-lifers quietly approach mothers scheduled for abortions and offer them red roses as a symbol of life…thus the name “Red Rose Rescue.” Attached to each rose is a card which states: “God is love and he loves you and your unborn baby. Don’t be afraid. Your life circumstances will change and this baby will give you boundless joy… There is help for you and your baby.” The reverse of the card contained phone numbers of local pregnancy help centers.

Frs Moscinski and Imbarrato, who led today’s Red Rose Rescues have been arrested several times prior, attempting to peacefully save preborn babies from death as have the majority of pro-lifers in today’s activism.

Today is the Catholic feast of St Joseph and Fr Imbarrato’s birthday.

“I felt strongly called to this mission of saving babies on this special day on which I give thanks for my own birth, knowing that God desires that these babies, conceived through His grace, are granted the additional grace of being born, loved, and cherished in this world,” Imbarrato said.

Organizers concluded: “Red Rose Rescues began in September 2017. Today’s saving efforts mark more than a dozen in a little over 10 months. Red Rose Rescues are known to have saved numerous babies’ lives from abortion as well as untold numbers of babies who may have been saved because women are not able to keep their appointment when these rescues occur. Rescuers have been known to remain in abortion facilities up to 3 hours praying, singing, counseling women, and witnessing to medical and building staff, and law enforcement.” ← Prev: Catholic New Mexico Gov Upset That Abortion Up to Birth Bill Was Defeated: “It’s Inexplicable to Me” Next: WATCH: Abortion Activist Caught on Video Stealing Crosses to Memorialize Babies Killed in Abortion →