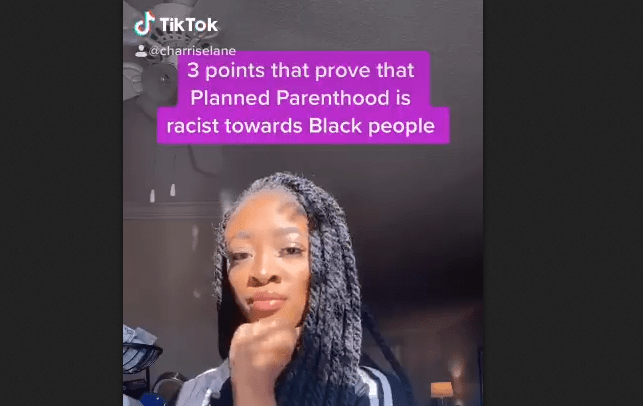 A young conservative black woman is raising awareness about the abortion chain Planned Parenthood through a series of short videos on social media.

Charrise Lane, an Orlando, Florida student with tens of thousands of followers on Twitter and TikTok, published a video explaining why “As a Black Woman, I will never support Planned Parenthood.”

She shared “3 points that prove” Planned Parenthood, a billion-dollar nonprofit that aborted more than 345,000 unborn babies last year, is a racist organization.

“Planned Parenthood has the majority of their clinics in Black Neighborhoods,” Lane said.

Her point likely comes from research by Protecting Black Life. Their study found that 79 percent of Planned Parenthood surgical abortion facilities are located within walking distance of minority neighborhoods.

Lane pointed to founder Margaret Sanger as more evidence. A well-known eugenicist, Sanger once wrote, “We don’t want the word to go out that we want to exterminate the Negro population …”

Lane also highlighted how “Planned Parenthood has social media platforms that are dedicated to and that targets [sic] Black Women.”

Millions of black voices have been silenced through abortion. Since Roe v. Wade in 1973, an estimated 20 million unborn black babies have been aborted in America.

These bleak numbers are a few of the reasons why Lane believes “you cannot be pro-Black and pro-choice.” Earlier this month, she posted another video online that exposed how abortions have devastated the black community.

In an interview last year, Lane told The Daily Signal that she hopes to become a lawyer and run for office someday. She said she supports President Donald Trump, in part, because his pro-life policies are helping Black Americans. ← Prev: Lindsay Graham: Pelosi Comment on Trump is ‘Most Shameful, Disgusting Statement by Any Politician in Modern History’ Next: Pro-Life Champion Senator Tom Coburn Passes Away After Battling Cancer for Years →