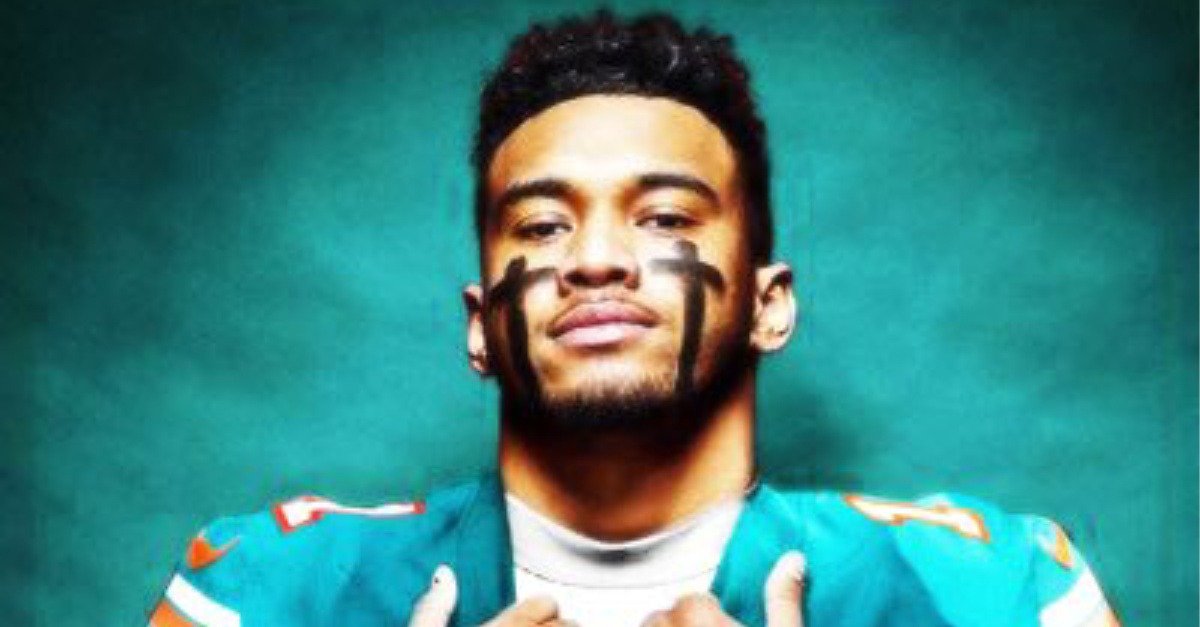 Miami Dolphins’ rookie quarterback Tua Tagovailoa unveiled his new number Tuesday, and he says it has a connection to his Christian faith. The former University of Alabama quarterback will wear No. 1 for the Dolphins, who finished 5-11 in 2019 and drafted Tagovailoa fifth overall in the first round last month. “For the Audience of 1,” Tagovailoa wrote on his social media accounts alongside an emoji of praying hands. He also posted a picture of himself in his new jersey, with eyeblack crosses emblazoned on each cheek. “Audience of One” is a popular phrase used by Christian athletes.

“The intent of the phrase is to help Christian players remember that everywhere in life – even in a stadium full of people – ‘we live and move and have our being in Him,’ and it’s His pleasure we should pursue above all else,” Athletes in Action’s Ed Uszynski wrote on the ministry’s website.

In week 13 of the 2016 NFL season, several Christian players for the Philadelphia Eagles wore customized cleats with the Audience of One acronym, “AO1,” on one side of the shoe and “ Romans 5:8 ” on the other. They also recorded a video explaining the meaning behind the Audience of One. “What does AO1 mean to us?” they explained in the video, rotating lines. “It means that we are playing for an Audience of One. When the lights go on and all eyes are fixed on us, our eyes are fixed on Him: Jesus, the creator of the universe. It’s not just a slogan, it’s a lifestyle. Living for Him, playing for Him, and giving Him all the glory. Win, lose, or draw – I play for an Audience of One.” Tagovailoa’s Twitter bio reads, “ 1 Cor. 2:9 .” The verse reads in the […]

For the Audience of 1🙏🏽 pic.twitter.com/kZYXaYVD1R

There is only one way to heaven. Not two or two thousand but only one way and that way is through Jesus Christ.

‘There is one body and one Spirit, just as you were called in one hope of your calling; one Lord, one faith, one baptism; one God and Father of all, who is above all, and through all, and in you all.’

← Prev: Baby With Heart Defect Defies the Odds After Mom Refuses Abortion: “We Wanted to Give Him a Chance” Next: Christian Persecution: The 'Evil Called Barack Obama' and the Genocidal Slaughter of Nigerian Christians →