Baby With Heart Defect Defies the Odds After Mom Refuses Abortion: “We Wanted to Give Him a Chance” 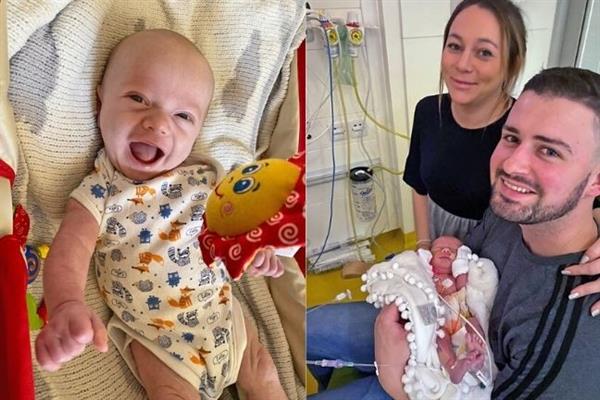 A mother, who refused to abort her unborn child, despite advice from doctors, has hailed her baby son a “miracle” after he defied the odds and survived

Mother, Sami Jo Quinn, from North Wales, was told by doctors to abort her unborn baby, after a 14-week scan revealed her child was suffering from a rare condition, causing the intestines to develop outside the body. The condition also posed the possibility of heart defects developing. Despite advice from doctors, Ms Quinn and her partner Luke refused abortion, and continued with the pregnancy. I couldn’t bear the thought of ‘what if’ Ms Quinn said: “Me and Luke were called into a room by a doctor and midwife, who told me the baby had gastroschisis. They told us the baby was at a high risk of complications in labour. When we found out about the condition, we were worried he wouldn’t survive. “But we wanted to give our baby a chance… “They handed us a booklet and told us that the condition is linked to heart syndromes such as Edwards Syndrome, a genetic disorder where the baby is born with a heart defect. “But they wouldn’t be able to diagnose this condition until the baby was 28 weeks, and by then it would be too late to terminate. They told us to consider aborting the baby because it might not survive. I felt crushed. Keep up with the latest pro-life news and information on Twitter. “I considered the advice, but I couldn’t bear the thought of what if.” After researching the testimonies of other babies who shared her son’s condition and survived, Ms Quinn refused to abort her baby.

“He is my miracle baby” Her baby boy, Jesse Quinn is now 19 weeks old. Jesse underwent an operation at only 10 […]