Israel Will Have It’s Temple Again: Rabbi Inspects Red Heifer in Secret Location in Israel for Use in 3rd Temple 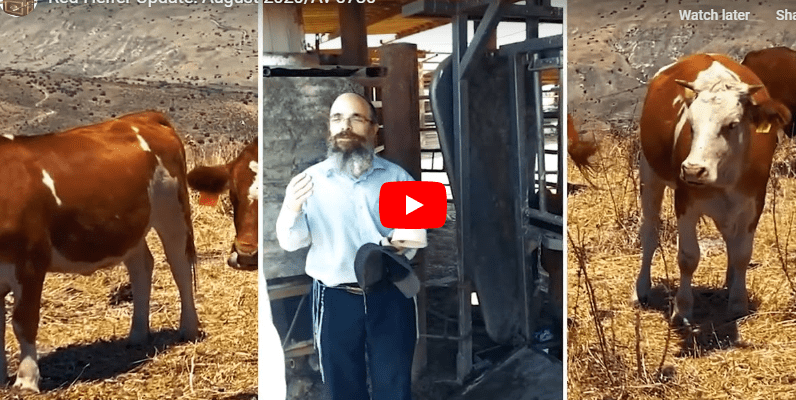 Rabbi Azaria Ariel, traveled to an undisclosed ranch in Israel to lead the Temple Institute’s efforts to raise a red heifer for the performance of the commandment of producing the purifying ashes of the red heifer. He recently inspected the current red heifer candidates and shared their status. One of the two more mature candidates is still very viable, even though it has a few hairs which aren’t sufficiently red, as required by halacha (Jewish law). Two new candidates were born in the early months of 2020, and they are currently viable. The ordinance of the red heifer is described in the Bible: This is the ritual law that Hashem has commanded: Instruct B’nei Yisrael to bring you a red cow without blemish, in which there is no defect and on which no yoke has been laid. (Numbers 19:2) The purifying power of the ashes of the red heifer possess the ability to overcome the spiritual impurity contracted via physical contact with a corpse or cadaver, known in Hebrew as טמא מת – tamei met . The renewal of the ashes of the red heifer would enable kohanim (Temple priests) today to achieve the highest level of spiritual purity, allowing them to resume their work in the Holy Temple. This would eliminate one more stumbling block on the way to rebuilding the Holy Temple and renewing the Divine service. Rabbi Azaria also mentions just a few of the many other commandments whose performance will be enabled by or enhanced by the resumption of the ashes of the red heifer. Following are Rabbi Azaria’s words translated into English. The video is subtitled in English: “We are hoping, with G-d’s help, to raise a kosher red heifer, with the intention of fulfilling the commandment of creating the ashes of […]

Israel will have it’s Temple again. That’s a Biblical fact. To better understand this Bible prophecy read below.

What is the Rapture and is it Biblical

You Can’t Stop Something That Never Started. The Temple Will Be Rebuilt and In Full Operation.

For emphasis let’s take a look at what Jesus was referring to in Daniel 9:27. Read and re-read the verse because too many it isn’t clear. The temple sacrifices are stopped! That means they have to of started right?

And he shall confirm the covenant with many for one week: and in the midst of the week he shall cause the sacrifice and the oblation to cease, and for the overspreading of abominations, he shall make it desolate, even until the consummation and that determined shall be poured upon the desolate.

Take a look at another verse spoken by our Lord and Saviour Jesus Christ in Matthew 24:20

But pray that your flight will not be in the winter, or on a Sabbath.

Jesus mentions the Sabbath because under the Mosaic Law Jews could only travel a specified distance on the Sabbath day.

I’m getting to my point but here is Paul writing to the Church then and for us today about the same event that will happen at some point in the future. 2 Thess 2:1-4:

1 Now we beseech you, brethren, by the coming of our Lord Jesus Christ, and by our gathering together unto him, 2 That ye be not soon shaken in mind, or be troubled, neither by spirit, nor by word, nor by letter as from us, as that the day of Christ is at hand. 3 Let no man deceive you by any means: for that day shall not come, except there come a falling away first, and that man of sin be revealed, the son of perdition; 4 Who opposeth and exalteth himself above all that is called God, or that is worshipped; so that

he as God sitteth in the temple of God, shewing himself that he is God.

“The TEMPLE IS BACK IN OPERATION, ISRAEL IS SACRIFICING ANIMALS AT THE TEMPLE, THEY ARE BACK UNDER THE LAW”

“WE, GRACE AGE BELIEVERS ARE NOT UNDER THE LAW BUT UNDER GRACE”

← Prev: Joe Biden's New Arizona Hire is a Scumbag and Proud of It | Broadcasting His Vile Belief's Via Twitter Expressing His Hatred for Women, Hate for Police and Hate for America Next: How the transgender movement destroyed a family. A mother tells her story. →