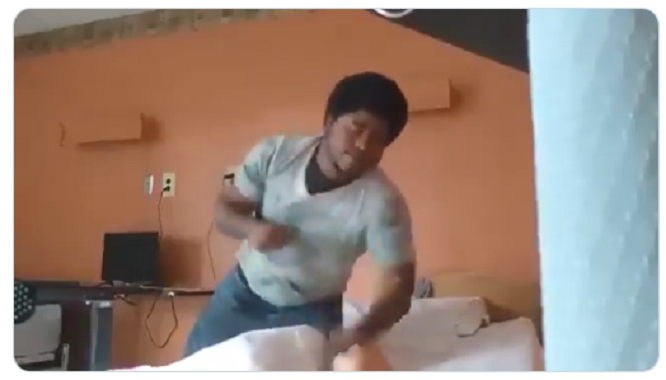 Police in Detroit, Michigan have arrested a man seen in a viral video filming himself brutally punching and hitting an elderly man who appears to be a resident of a nursing home. The video comes on the heels of Democrats like Andrew Cuomo facing massive criticism for putting coronavirus patients in nursing homes, causing thousands of elderly resident to die. In the shocking video, which is making the rounds on social media, a young man sets his phone up to record him wailing away with punch after punch while an elderly man is too powerless to stop it. After dozens of punches, the man flips the elderly gentleman on his back and the nursing home resident is seen bloodied and battered. “Stop please,” the elderly man mumbles in a desperate attempt to end the violence. The attacker then uses the man’s own blanket to wipe away blood in a possible attempt to cover up his assault, then repeatedly tells the elderly man, “Get the f— off my bed.” As a television plays in the background the attacker repeatedly looks into the camera as the assault takes place. According to the Detroit News , the attacker has been arrested but few other details have been released: Detroit Police Chief James Craig said the department is investigating the incident that allegedly occurred at Westwood Nursing Center on the city’s northwest side. “The nursing home was unaware of the assault until they saw the video,” Craig said during a press conference Thursday. “We are still investigating that aspect of the case, but we do have a suspect in custody.” Police did not name the suspect or provide any additional details on the circumstances. Elder abuse has become such a massive worldwide problem that June 15 has been designated World Elder Abuse Awareness […]

← Prev: In North Korea, Churches Consist of Meetings of Two or Three, Christians Read Bibles in Secret Next: Feminist Claims: “God is All Right With” Killing Babies in Abortions →