New Innovative Way to Crack Down on Churches 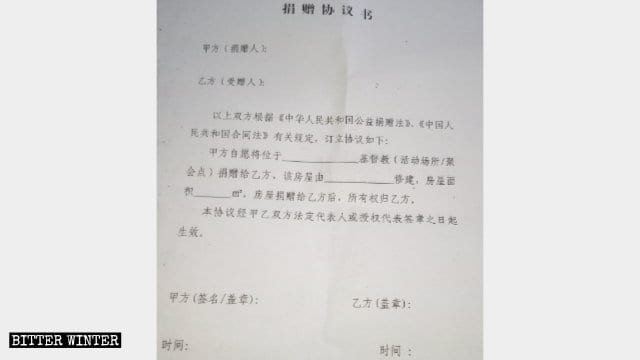 In an attempt to hide its persecution of the religious, Chinese authorities are now forcing Christians to “donate” their churches.

It’s a dastardly new way to get churches to hand over their houses of worship – forcing them to pretend they’re willingly giving them to the Chinese government.

On December 23, 2018, Mr. Gao (pseudonym), who is in charge of a Three-Self church at a township in Sanmenxia city, central China’s Henan Province, received an oral notice from a government employee demanding that he sign a “donation agreement” and state publicly that he had voluntarily donated the church to the village committee

Mr. Gao to sign citing “orders from higher authorities” as the reason. They also told him not to tell anyone about this and that if he refused to sign, other church leaders would follow his lead, therefore making “it difficult to get things done.”

For two days, government employees urged Mr. Gao sign the agreement. Thinking of the church, and the Christians who lived frugally to raise funds to build it, Mr. Gao attempted to negotiate with the officials. They wouldn’t budge, repeating the party line that the “orders from above” must be followed, meaning that he must sign. They also blatantly lied, telling him the agreement was temporary and that everything would go back to normal after the “church donation” campaign was over.

Afterward, Mr. Gao requested to write up a written pledge guaranteeing the church would be returned to them – the employees naturally refused. It was then that Mr. Gao realized he had been scammed, but the church “donation” was already complete.

According to sources, in September 2018, this Three-Self church had already been cracked down on once and forcibly taken over by the local government, but the Christians never thought government officials would go so far as to take their church from them under the auspices of a willing donation.

The forced donation of churches isn’t an isolated incident. The leader of a Three-Self church in a county in Henan’s Lingbao city also received a “donation agreement” issued by the government. Other similar operations are being implemented throughout Henan, and some religious individuals are worried that mass numbers of Christians are going to lose their places of worship as a result.