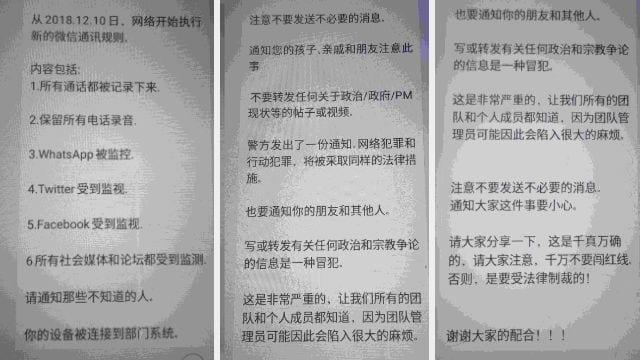 On orders from the top, local governments are investigating workers, threatening to cut pensions, and restricting social media. Examples from Inner Mongolia.

According to a government official from a town in the Inner Mongolia Autonomous Region’s Chifeng city, who spoke under the condition that his identity would not be disclosed, the town has launched a secret campaign to eradicate religions in the name of “cleaning up gang crime and eliminating evil” – a nation-wide campaign launched in January 2018 to fight organized crime. As Bitter Winter reported earlier, this campaign has been widely used to crack down on religious belief across China.

The official stated that in November and December of 2018, the mayor of the town held multiple meetings to coordinate the campaign. The mayor said that Xi Jinping had listed people who believe in God as targets for “cleaning up gang crime and eliminating evil,” and that all Christian denominations except the Three-Self Church were being classified as xie jiao organizations. The town is expected to continue these “anti-crime” operations until they have suppressed all religious beliefs in the area. The campaign would be open-ended, continuing until the job is completed.

After receiving this tip, Bitter Winter visited the area to see how the campaign was being implemented.

“Currently, the state is cracking down on all religions, and investigations are going on in the village to find out just how many villagers believe in God,” a village secretary from Chifeng city revealed to Bitter Witter on December 17, 2018. “If investigations uncover religious believers, various types of state subsidies and welfare benefits for those villagers will be canceled. The village will also mandate socialism education for those believers to study Maoism, Marx-Leninism, etc.”

According to Bitter Winter’s previous reports, threatening to “cancel subsistence allowances and old-age pensions” in order to coerce Christians into renouncing their faith are common techniques employed by the Chinese Communist Party.

A house church Christian in Chifeng told Bitter Winter that officials from seven government offices had gone to talk to the leader of his church. The officials demanded that he give his allegiance to the state-controlled Three-Self Church. They even promised to provide him with an office and pay him a salary, but he refused. As a result, the church was forced to stop holding meetings in December 2018, and disperse into hidden congregations at believers’ houses.

“The state has increased its efforts to clean up gang crime and eliminate evil, and anti-gang-crime groups have been established at the village level to regulate public order,” one village official reported. “Anyone who doesn’t turn their lights off by 9 or 10 p.m. will be visited and interrogated, and if strangers or a group of people are found gathering, they will be reported to the police and be seized. In particular, anyone constructing temples, churches, or monasteries, or holding various religious gatherings will be seized and sentenced to three to seven years of imprisonment. This is a second Cultural Revolution.”

The push to find and punish believers is so intense that authorities have canceled weekend leave for investigators who are forced to continue working on Saturdays and Sundays.

“Our superiors have ordered that we seize people who believe in God on charges of disrupting social order,” one official complained. “But without evidence, how are we going to arrest them? If the government continues to push this agenda, there will be more and more people who believe in God. I’ve already been working for weeks on end, and I haven’t been given time to rest. I can’t look after my kids, and in these past few weeks I’ve been mentally and physically exhausted.”

To help the campaign, authorities have stepped up surveillance of the internet to find people who spread religious material. And they are mobilizing workplaces to help enforce the crackdown.

On December 9, 2018, one religious individual received an alert in his work unit’s WeChat group stating, “Starting from December 10, new WeChat communication regulations will be implemented online, and records will be kept of all phone communications. WhatsApp, Twitter, Facebook, and all other social media and forums will be put under surveillance, and writing or forwarding messages related to any political or religious controversies is an offense. This is extremely serious, and you are warned not to cross the “red line” by any means.”

Authorities have long used various hierarchies and institutions, such as employers, to investigate and restrict the religious beliefs of Party members, workers, and average people. Now, however, this practice is escalating.

According to sources, a village in Jalaid Banner provided every household with a notice of village regulations in June of 2018, demanding that villagers not believe in God or participate in religious activities. (A banner is an administrative division in Inner Mongolia that corresponds to the county level.)

One day in September, a work unit in Oroqen Autonomous Banner held a meeting to discuss a document the firm had received from the local Public Security Bureau. The document declared, “If any workers or their relatives have religious beliefs, they must be reported to the superior authorities.” After the meeting, the leadership of the work unit once again urged the president of its labor union to investigate and handle this matter.

These reports from Inner Mongolia demonstrate the pressure being brought to bear on religious people, and the lengths to which the authorities will go to crush religion in local communities. Such efforts are being replicated across China’s vast territory.

Own a Compass or Boxing Gloves? You May Be a Terrorist
Notice Regarding Handing Over “Three Illegals and One Item”
Everyday items fro…