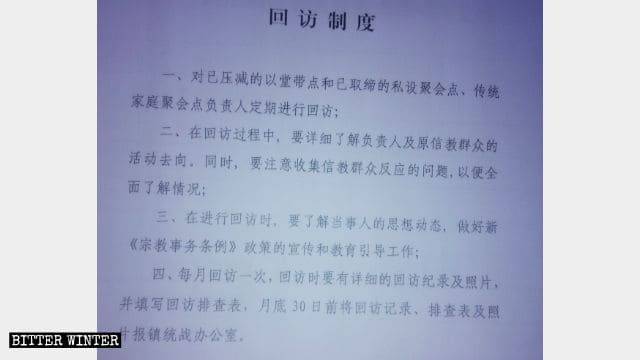 A town government employee from central China’s Henan Province has provided to Bitter Winter the details of “Return-Visit System” to suppress permanently closed down churches. The source has also provided two forms to be used in the suppression process, which shed further light on the extent of the persecution of believers in China.

The Return-Visit System mandates that government personnel in villages and towns conduct an inspection every month after a church – both house and Three-Self church – has been closed. During the return visit, they must make a detailed record, take photos, and fill out a return-visit checklist. They must also question the head of the closed church. At the end of the month, the documents and photos must be submitted to the county’s United Front Work Department office.

The policy also stipulates that government personnel must obtain a clear understanding of the mood and opinions of the congregations of closed places of worship and “do a good job of policy promotion and educational guidance.”

Bitter Winter also obtained the “Periodic Checklist for Christian Meeting Venues” from the source. The checklist requires inspectors to document the whereabouts of the person in charge of the meeting venue; whether all religious symbols and furniture had been removed from premises; what the church is used for if it had been repurposed; whether all documentation related to the closing down of a church is in order; whether members of the congregation are still meeting privately, and so on.

Another form delivered to Bitter Winter is entitled “List of Persons Who Are Not Participating in Religious Activities at the Arranged Venue.” This form is used to collect detailed information on whether Christians from a closed down house church are attending Three-Self church as instructed, and if not, where they are going. In short, the government is tracking people to see if they are following orders and report those who do not comply.

In November 2018, two police officers came with a video camera to a house church meeting venue in Henan’s Sanmenxia city that had been shut down. They took videos of the entire meeting place and asked the leader of the church whether believers were still holding gatherings. After confirming that meetings had not continued, the officers posted a “gatherings have stopped” notice on the church door.

Similar return visits were carried out at a house church in Zhengzhou city’s Jinshui district in Henan. In August 2018, Elim Church was shut down by the government. To prevent believers from holding gatherings secretly, officials put up two banners at the entrance of the church. One of the banners prohibited any gatherings by non-authorized religious groups, and the other read: “A fine of 20,000 to 200,000 RMB (about $2,945 to $29,450) will be imposed for allowing illegal religious activities.” Government personnel also warned believers that they were forbidden to tear down these banners under penalty of fines and arrest. In September, the government sent staff once again, this time to clear out all the furnishings from the meeting venue.

More robust “return visit” policies were required for a church in Xili village under the jurisdiction of Sanmenxia city. In August 2018, the church was “confiscated” by the government. Afterward, some believers held gatherings of two or three people. Some secretly returned to the church in the middle of the night to pray and left as soon as dawn arrived.

On December 12, 60 to 70 believers secretly returned to the church to hold a gathering. Most of them were elderly believers who suffer from illness and have limited mobility. After finding out about the gathering, 30 government personnel rushed to the church, carried the seniors out of the building and left them on the ground outside the entrance. One of the elderly Christians who was carried out is nearly 80 years old and he spends his days in bed in a cave-dwelling behind the church. Others who were removed suffered injuries or torn clothes.


New Innovative Way to Crack Down on Churches
In an attempt to hide its persecution of the religious, Chinese authorities are …

← Prev: New Innovative Way to Crack Down on Churches Next: CCP Goes After Church Venues in Disrepair →