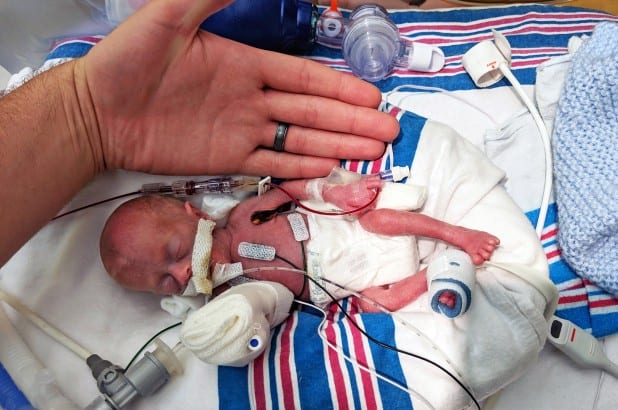 Connor Florio spent nine months in the hospital, and there were times when his parents thought he might not survive.

But this spring, Connor grew well enough to finally leave the hospital and go home with his parents.

“I didn’t really believe he was coming home until we took him to the car and brought him to the house,” his mother, Jaimie Florio, said.

Connor was born on July 13, 2018, 13 weeks prematurely, his mother said. Because he was so underdeveloped, he struggled with a number of serious health problems, including brain bleeds, breathing trouble and an eye disease, according to the report.

Doctors described Connor as “feisty” as he fought through each challenge. When he was discharged from the hospital this spring, he weighed 11 pounds, his family said.

Jaimie Florio said her son is healthy and growing strong.

Modern medicine is saving premature babies who are smaller and younger than ever before. Lyla Stensrud, a Texas preschooler, is believed to be the youngest premature baby to survive, born after 21 weeks and four days of pregnancy. In 2017, the journal Pediatrics highlighted her survival.

A Duke University study published in 2017 reported that babies born at just 23 weeks are surviving outside the womb at a greater rate than ever before. Researchers examined 4,500 babies between 2000 and 2011 and found a “small but significant drop in fatalities for babies born between 23 and 37 weeks gestation,” as well as a decrease in premature babies manifesting neurophysiological problems, the Daily Mail reported.

While more micro-premature babies are surviving, some hospitals will not treat them. Research published in 2015 in the New England Journal of Medicine found that 23 percent of premature infants survive as early as 22 weeks of pregnancy, but some hospitals have policies against treating babies at such an early age.

These troubling policies came to light with the story of Maddalena Douse in 2012. The British infant was born weighing just 13 ounces at birth. Many British hospitals have policies against trying to save premature infants who weigh less than 1 pound. However, when one of the medical staff weighed the baby girl, they accidentally left a pair of scissors on the scale, bumping her weight up to the minimum. Doctors, who did not realize the mistake until later, treated Maddalena and saved her life. ← Prev: Planned Parenthood Sues Arizona Because Its Pro-Life Laws Have Saved Too Many Babies From Abortion Next: Man Raped 12-Year-Old 500 Times Resulting in 7 Abortions, Abortion Clinics Never Reported the Crimes →