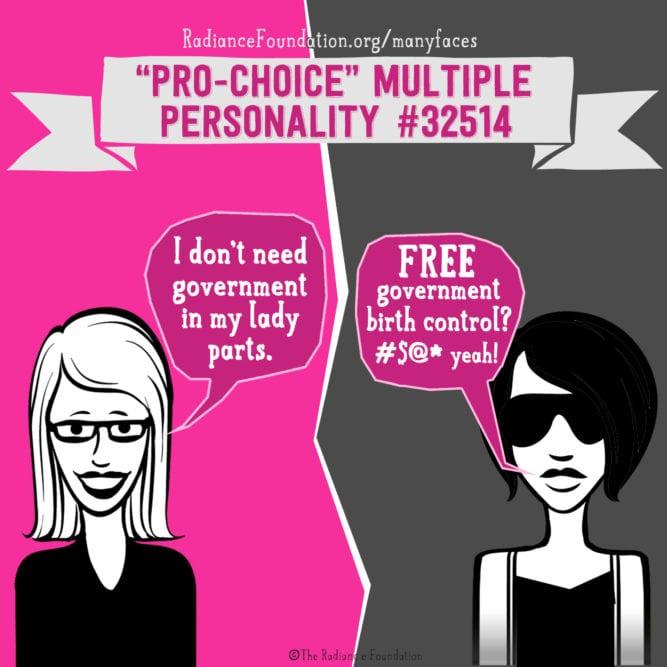 Trump drives women to birth control. Well, at least that’s what all of mainstream media is trying to report. Reinforcing the myth that Republicans are trying to take away birth control, the MSM is shouting their contraception lies as loudly and as often as possible. But fear is good medicine for abortion activists. And the latest fear tactic is a singular “study” that claims that women (18-45), with commercial insurance, sought long-acting reversible contraceptives (LARCs) at a rate that “spiked” 21% higher 30 days after the 2016 elections than in the same period a year prior.

MSM never bothered to question the study, the authors, or look at any historical trends (easily accessible from the CDC) of LARC usage. That would require j-o-u-r-n-a-l-i-s-m.

Let’s start with these words from the study’s lead author, Dr. Lydia E.W. Pace, the Director of the Women’s Health Policy and Advocacy Program at Brigham & Women’s Hospital in Boston: “There is limited concrete evidence about why this may have happened.” Ok. So, let’s go with the fake feminist narrative of victimhood and tales of birth control prohibition. The New York Times further illuminated the absurdity: “[the study] found that an additional 2.1 IUDs or implants inserted per 100,000 women per day were associated with the election, though it isn’t possible to know for sure because they did not study the motivation of the women who received them.”

Well, there you have it. How do you draw causation if you don’t look at a cause? In the same NYT article, Dr. Pace asks: “Was there something else that happened that could account for that rise? Not that I know of.” Now that’s scientific.

But science isn’t the point of the study and many others published in these esteemed “peer-reviewed” journals. It’s politics. Dr. Lydia Pace is a pro-abortion “researcher” who lamented in her 2007 clearly unbiased study, entitled: “Maintaining access to safe abortion in the United States: a post-Gonzales primer and guide to action.” Now that’s some objective science there! Dr. Pace accused the Supreme Court of upholding, with “shocking ease”, the Partial Birth Abortion Ban Act of 2003 in the Gonzalez versus Carhart ruling. She couldn’t write ‘partial birth abortion’ but used the less barbaric sounding medical terms “intact dilation and extraction”.

I love how pro-abortion activists want to get all sciency at random moments. “Partial birth abortion isn’t even a medical term!” they decry. Sure, because when people talk about getting their wisdom teeth pulled, they’re always throwing around how they’ve had a mandibular third molar extraction. Wait. I better not talk about having teeth pulled. Planned Parenthood loves comparing killing an unborn child with having teeth extracted.

Back to this politically-driven study, the Boston Globe claimed that “reports began surfacing that women were rushing to doctors and clinics seeking IUDs and other implants”. Dr. Pace is quoted as saying “most of the reports were isolated or anecdotal.” They were. From the nation’s largest abortion chain’s Director of Health Media, Elizabeth Clark, for instance. Planned Parenthood cited a “ten-fold increase in appointments for IUDs” in the first week after the 2016 election. Their annual reports, show a different story, of course. They saw a 3% decline in their overall “Contraception Services” in their 2017-2018 Annual Report (which actually includes medical services from the year prior), but an increase of 13% in their LARC services from October 1, 2016 through September 30, 2017. Not sure how that ten-fold increase in appointments figured into any of that. (Planned Parenthood doesn’t actually report specific numbers that show whether appointments resulted in insertions, removals or just consultations.) Interestingly, Planned Parenthood experienced a higher increase of 14% in LARC services the previous year, spanning from October 1, 2015 through September 30, 2016.

Anecdotes are fun. Anyone can have them. And no one has to prove them.

Another one came from Massachusetts-based Athena Health, which inspired Dr. Pace to conduct further “study”; it asserts the same 21 percent rise but between January 2016 and January 2017. Of course, the expert they quote is not identified as a late-term abortionist who received the William K. Rashbaum abortion “provider” award from Physicians for Reproductive Health in 2013 and Planned Parenthood’s Margaret Sanger Award in 2014. (Let’s not forget Sanger’s vile definition of birth control.) She’s not described as having the dubious distinction of bringing late-term abortions to the University of New Mexico (UNM), the trafficking of aborted babies’ body parts and, reportedly, allowing infanticide to occur for children born alive following an abortion in violation of the federal Born-Alive Infants Protection Act.

She’s merely quoted repeatedly in the article and identified as Eve Espey, M.D., chair of the Department of Obstetrics and Gynecology at UNM. She explains the reason for the alleged (but not yet reported by the CDC) increase in LARCs: “This is about people’s fears about the contraceptive mandate going away…it changes the way we talk to patients, depending on what insurance they have. We’re going to go back pretty quickly to the [way contraception was covered] before.”

And that leads us to what that looked like before. Let me interject that I don’t think American taxpayers should be forced to pay for others’ sexual activity, especially not their abortions.

The CDC’s National Survey of Family Growth shows a much more compelling picture of LARC usage of all women ages 15-44, with far higher increases than the alleged “Trump Effect”. From 2006-2010 to 2011-2013, LARC use increased dramatically among Hispanic women and non-Hispanic white women—129% and 128%, respectively. Non-Hispanic black women’s usage increased by 30%. These increases rose to levels lower than those seen in 1982, long before Obamacare and zero-copay for birth control, including LARCs, tried to abort our First Amendment rights.

So, the next time MSM blames (some) women’s fears on Trump, the only thing that is truly long-acting is the #fakenews establishment’s penchant for thought control.

← Prev: Hillary Clinton Defends Late-Term Abortion: OK to Kill Those Babies Because It’s Just 12,000 a Year Next: President Trump Rebukes Andrew Cuomo to Over Legalizing Abortions Up to Birth →