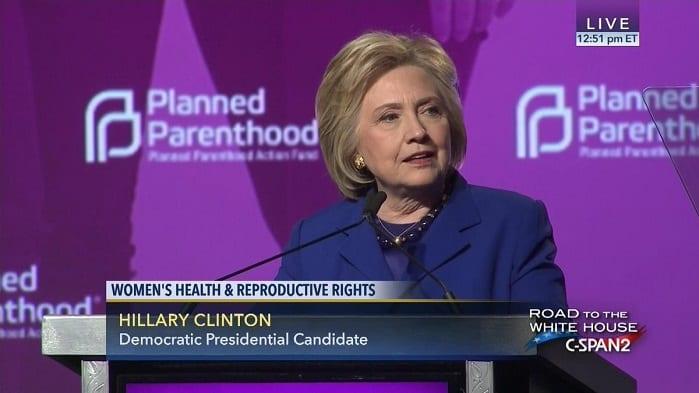 Twice-failed presidential candidate and former first lady Hillary Clinton tweeted out a defense of a topic near to her heart Monday: late-term abortion.

In her tweet, Clinton highlighted the fact that “only about 1% of abortions happen later in pregnancy—almost always because a woman’s health or life is at risk, or the pregnancy is no longer viable.”

Only about 1% of abortions happen later in pregnancy—almost always because a woman’s health or life is at risk, or the pregnancy is no longer viable.

Lying about this is dangerous, and a slap in the face to families who face heartbreaking situations. https://t.co/732pfPXaxr

Clinton is correct that abortions after 21 weeks make up only 1.3 percent of abortions annually, according to the most recently available 2014 data from the pro-abortion Guttmacher Institute, however, that still comes to just over 12,000 abortions a year.

Additionally, it is not clear where Clinton is getting her claim that the reason is “almost always” the woman’s “health or life” as the Guttmacher Institute cited a study from 2013 that found “most women seeking later terminations are not doing so for reasons of fetal anomaly or life endangerment.”

She also implied President Trump misrepresented the issue in his State of the Union address, adding that “lying about this is dangerous, and a slap in the face to families who face heartbreaking situations.”

“There could be no greater contrast to the beautiful image of a mother holding her infant child than the chilling displays our Nation saw in recent days,” President Trump said last week. “Lawmakers in New York cheered with delight upon the passage of legislation that would allow a baby to be ripped from the mother’s womb moments from birth. These are living, feeling, beautiful babies who will never get the chance to share their love and their dreams with the world.”

He was referencing the measure that passed last month in New York which permits abortion at “any time” to protect “a patient’s life or health” and removes criminal penalties for abortion.

The “life or health” stipulation is a broad and notoriously vague legal term that can be interpreted to even include mental health.

“To defend the dignity of every person, I am asking the Congress to pass legislation to prohibit the late-term abortion of children who can feel pain in the mother’s womb,” he said later in the address.

In reference to his claim about pain capable unborn babies, the article highlighted that “an analysis of research in this area published in JAMA in 2005 found that pain sensation requires neural connections into the cortex, and the cortex is not functionally developed until the 26th week or later.”

It also pointed to a Royal College of Obstetricians and Gynaecologists review which found that “’the fetus cannot experience pain in any sense prior’ to 24 weeks.”

However the article excludes any reference to a contradictory growing body of more recent scientific evidence showing that unborn babies can feel pain at 20 weeks, including a recent NIH-funded study which found that infants delivered at 22-24 weeks who received treatment had increasing rates of survival without any neurological impairment.

Another study found that “60 percent of infants born at 22 weeks who receive active hospital treatment will survive.”

The article also argued that “contrary to Mr. Trump’s claim, late-term abortions do not allow ‘a baby to be ripped from the mother’s womb moments before birth.’”

But aside from pointing out that “late-term abortion” is not technically a medical term and illustrating that abortion after 21 weeks is rare, it points to nothing to contest Trump’s claim.

“When they occur, it is usually because the fetus has been found to have a fatal condition that could not be detected earlier, such as a severe malformation of the brain, or because the mother’s life or health is at serious risk,” the author claims without providing any evidence.

While the article helpfully points out that the New York law is “similar to stipulations made by the Supreme Court” in allowing abortion past 24 weeks “if the fetus is not considered viable or if the procedure is considered necessary to protect the woman’s life or health,” that does not change the fact that the law does indeed allow an unborn baby to “be ripped from the mother’s womb moments from birth,” in these cases as Trump said.

Clinton’s tweet and Trump’s remarks are reminiscent of the exchange the two had on the issue during a 2016 debate when Trump argued that “with what Hillary is saying, in the ninth month, you can take the baby and rip the baby out of the womb of the mother just prior to the birth of the baby…now you can say that that’s okay, and Hillary can say that that’s okay, but it’s not okay with me.”