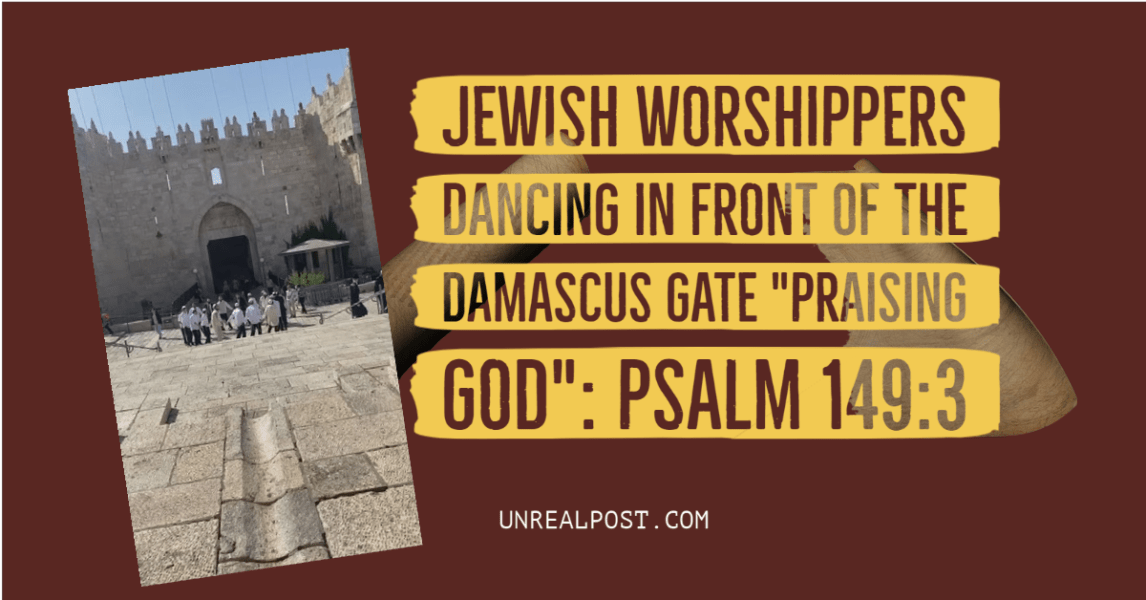 The Damascus Gate has been at the center of clashes between Arab rioters and police. Things looked much different this morning as Jewish worshippers on their way for a special Shavuot prayer at the western wall stopped there to dance and praise God!

How appropriate is Psalms 149 in the context of what’s going on in Jerusalem and the Middle east? Read Psalms 149 it is only 9 verses but it is so apropos.

‘Praise the Lord! Sing to the Lord a new song, And His praise in the assembly of saints. Let Israel rejoice in their Maker; Let the children of Zion be joyful in their King. Let them praise His name with the dance; Let them sing praises to Him with the timbrel and harp. For the Lord takes pleasure in His people; He will beautify the humble with salvation. Let the saints be joyful in glory; Let them sing aloud on their beds. Let the high praises of God be in their mouth, And a two-edged sword in their hand, To execute vengeance on the nations, And punishments on the peoples; To bind their kings with chains, And their nobles with fetters of iron; To execute on them the written judgment— This honor have all His saints. Praise the Lord!’

The Temple Mount in Jerusalem belongs to the Jews. Look at II Samuel chapter 24, and let’s start at verse 18. David is king, this is the early days of David’s reign, and Hebron was his capital. And then he moved the capital from Hebron up to Jerusalem and this is the beginning of that. Read on…

“And Gad came that day to David, and said unto him, Go up, rear an altar unto the LORD in the threshingfloor of Araunah the Jebusite.” Remember the Jebusites lived in the area of what is now Jerusalem.

“And David, according to the saying of Gad, went up as the LORD commanded. 20. And Araunah looked, and saw the king and his servants coming toward him: and Araunah went out, and bowed himself before the king on his face upon the ground. 21. And Araunah said, Wherefore is my lord the king come to his servant? And David said, To buy the threshingfloor of thee, to build an altar unto the LORD, that the plague may be stayed from the people.” There was a plague on Israel for a rebellious act. Now verse 22.

“And Araunah said unto David, Let my lord the king take and offer up what seemeth good unto him: behold, here be oxen for burnt sacrifice, and threshing instruments and other instruments of the oxen for wood. 23. All these things did Araunah, as a king, give unto the king, (David). And Araunah said unto the king, The LORD thy God accept thee. 24. And the king said unto Araunah, Nay; but I will surely buy it of thee at a price: neither will I offer burnt offerings unto the LORD my God of that which doth cost me nothing. So David bought the threshingfloor and the oxen for fifty shekels of silver. 25. And David built there an altar unto the LORD and offered burnt offerings and peace offerings. So the LORD was intreated for the land, and the plague was stayed (ended) from Israel.”

So what spot is this threshing floor? The Temple Mount. It’s where the Temple was built years later under Solomon. So here you’ve got a piece of property that was bought and paid for by King David, who was King over Israel.  The very place where the Jewish worshippers in the video are dancing and singing praised to God – Jerusalem, the Temple Mount. God’s word just simply screams at us that if people would just simply know and believe the Word of God, we wouldn’t have any problems. But we know the world won’t do it and Muslims won’t for sure. The United Nations won’t. Western Europe won’t.

← Prev: Video of Lebanon Army Stopping Lebanese Militants from Attacking Israel Border Fence Next: Cyprus 'devil' song by 'Elena Tsagrinou' real goal is to condition minds for the "Beast" and His System →