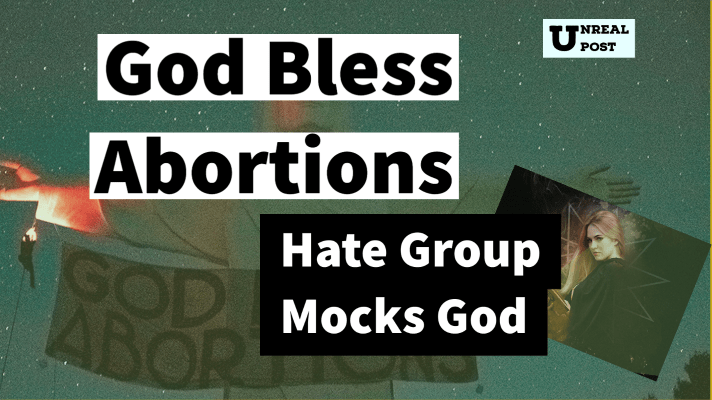 Indecline, a two-decade-old activist art collective, hung a 44-foot banner that reads “GOD BLESS ABORTIONS” on a massive monument of Jesus in northwestern Arkansas Thursday night. “The project, entitled ‘God Bless Abortions,’ is in direct response to the dramatic attempts being made in Arkansas and throughout the South, to ban abortion services to women in need,” the art collective said Friday.

The banner was draped between the outstretched arms of the 67-foot Christ of the Ozarks statue in Eureka Springs on Thursday night.

Members of Indecline disguised themselves as a construction crew to sneak onto the property, then used pulleys and other climbing gear to hang the banner.

Originally built in 1966, the Christ of the Ozarks statue weighs 2 million pounds and is made of 24 layers of white mortar, according to The Great Passion Play, which is performed nearby.

This is not the group’s first project surrounding abortion. In March, they vandalized a Christian billboard in Missippi to read, “Worried? Planned Parenthood offers abortions,” instead of, “Worried? Jesus offers security.”

More clear indicators that the Lord is coming for His Church

But know this, that in the last days perilous times will come: For men will be lovers of themselves, lovers of money, boasters, proud, blasphemers, disobedient to parents, unthankful, unholy, unloving, unforgiving, slanderers, without self-control, brutal, despisers of good, traitors, headstrong, haughty, lovers of pleasure rather than lovers of God.

This is what Christ-rejecting mankind does. This is pure evil on full display for the whole world to see.

‘But evil men and impostors will grow worse and worse, deceiving and being deceived.’

Ultimately, the solution is the gospel of grace. No matter how far down, how wicked mankind falls. God’s grace abounds even more. Romans 5:20. As believers, we must pray that the Lord open the hearts of the members of this group ‘Indecline’. And that they come to the knowledge of God’s free gift of salvation.

God sent His only Son, Jesus Christ, to die for them and ALL mankind.

Yes! The God of glory took on flesh to shed His precious blood and die on the cross for our sins, was buried, and rose from the dead three days later. Never to die again. Victorious over sin, Satan, and death itself
(1 Corinthians 15:1-4).

← Prev: Russia, Iran, and Turkey Prepping for War with Israel Next: China Will Play a Dreadful Role in the End Times by Killing Billions →