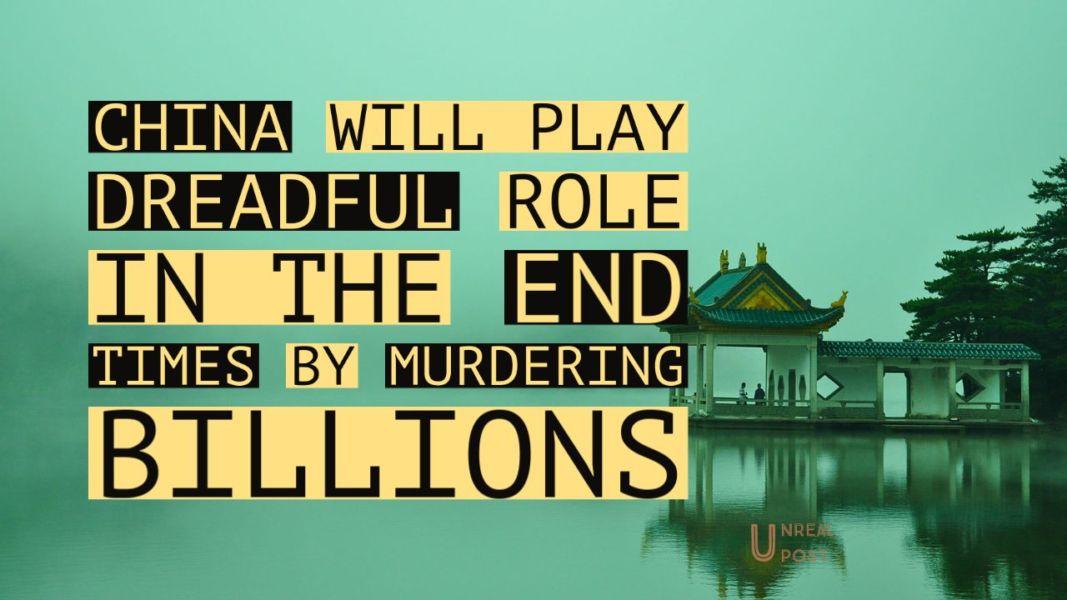 Unfortunately, China will play a dreadful role in the End Time scenario by being a key player in the murder of billions of people.

Please watch this short video below and see from Scripture what horrific role the Chinese military will play near the end of the seven years of Jacob’s trouble.

China vows retaliation after the US expands trade blacklist

Beijing said it would “take necessary measures” in response to Washington’s move to blacklist over a dozen Chinese firms.

The US says the companies are linked to abuses against Uyghurs and other Muslim minorities.

The move comes as the United States and other Western allies ramp up pressure over China’s alleged human rights abuses against the Uyghur Muslim minority in Xinjiang province.

What exactly did China say?

In a statement, China’s Commerce Ministry said the move amounted to an “unreasonable suppression of Chinese enterprises and a serious break of international economic and trade rules.”

The ministry said China was prepared to “take necessary measures” in response to the move to protect Chinese companies.

In the past, China has responded to sanctions with retaliatory measures of its own, targeting western officials and institutions with visa bans and curbs on financial links.

Why did the US expand the blacklist?

On Friday, the US added numerous Chinese technology and electronics firms to its trade blacklist.

Washington accused the companies of helping enable “Beijing’s campaign of repression, mass detention and high-technology surveillance” against the Uyghur and other Muslim minorities in Xinjiang province, according to a statement from the US Commerce Department.

Among those added to the list were 14 companies over their links in Xinjiang. Five other firms were added for alleged contributions to China’s military.

The blacklist distinction means US companies are barred from selling equipment and other items to Chinese firms.

Since 2017, China has detained over 1 million people in camps in Xinjiang province — primarily Uyghurs and other ethnic minorities, including Huis and Kazakhs.

Observers say the camps are part of a plan by the Chinese government to forcibly assimilate ethnic minorities.

Reports have also emerged of forced labor and torture at the camps as well as coerced sterilization. China strongly denies the allegations, labeling the facilities “reeducation centers” that seek to prevent extremism.

That’s 200,000,000 if my math is correct. And there is only one power on earth that bragged about being able to put 200 million men on the field of battle, and that is China. They have close to two billion people I believe that this 200 million man army will be the Chinese military along with a few of the close-by nations. And they will make their way west toward the Middle East.e 25
IMPORTANT: During this time period, when the Church has been removed and the 7 years of Jacob’s Trouble begins. The supernatural will be commonplace.

God will cause this 200 million Chinese army to march westward toward the Middle East. And this army will literally destroy and kill everything in their path.

This Chinese Horde will murder, mutilate, and ravage cities as they move toward the middle east. There is one barrier to this demonically powered 200 million man army the Euphrates river. But this barrier will be removed.

It will be the sixth angel who pours out his bowl judgment on the great river Euphrates, and the river will dry up.

“And blasphemed the God of heaven because of their pains and their sores, and repented not of their deeds. And the sixth angel poured out his vial upon the great river Euphrates; and the water thereof was dried up (why?), that the way of the kings of the east might be prepared.”

“And I looked, and behold a white cloud, and upon the cloud one sat like unto the Son of man, having on his head a golden crown, and in his hand a sharp sickle.” I feel this is an allusion to Christ. He is the One who is about to reap this harvest.

“And another angel came out of the temple, crying with a loud voice to him that sat on the cloud, `Thrust in thy sickle (they used to use the sickle to harvest the grain), and reap: for the time is come for thee to reap; for the harvest of the earth is ripe.’” Remember the communication is between the angel and Christ.

“And he that sat on the cloud thrust in his sickle on the earth, and the earth was reaped.” Chapter 16 shows the call going to all nations to come to the Middle East. That’s the reaping A Sovereign God is bringing about.

“And another angel came out from the altar, which had power over fire; and cried with a loud cry to him that had the sharp sickle, saying, Thrust in thy sharp sickle, and gather the cluster of the vine of the earth: for her grapes are fully ripe.”

“And he gathered them together (this is the power of a Sovereign God working through, of course, the mindset of the Anti-christ who puts out the call to the nations to come to Jerusalem) in a place called in the Hebrew tongue, Armageddon.”