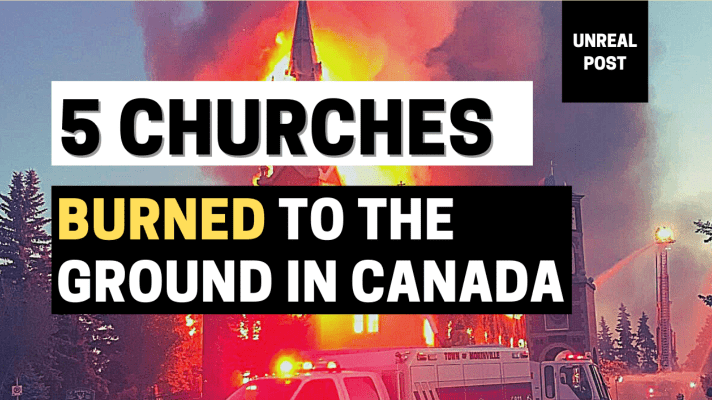 A Roman Catholic church located in Morinville, Alberta, was set ablaze this past Wednesday morning, which is the fifth Canadian church set on fire in a week.

Videos posted throughout social media sites such as Facebook and Twitter show St. Jean Baptiste church, located roughly half an hour outside of the city of Edmonton, being immersed with flames and the steeple eventually falling over, The Toronto Star reported.

Alberta Premier Jason Kenney denounced the recent attacks on Catholic churches in the past few weeks in a statement on Wednesday, labeling the latest attack on St. Jean Baptiste as what “appears to be another violent hate crime targeting the Catholic community.” It is unacceptable in Canada,” Kenney added. ”

These attacks targeting Christian churches are attempts to destroy the spiritual sites that are important to people of faith across Alberta, including many Indigenous people.”

The recent church burnings come on the heels of the discovery that the remains of 215 Indigenous children were discovered buried at the former Kamloops Indian Residential School, according to a press release from the Tk’emlups te Secwepemc tribe on May 27.

Tryouts for the Beast and His Bestial System

Canada, like China, is practicing for the bestial system that will come upon the world. This is no doubt Christian persecution and it will only get worse and worse.

‘But evil men and impostors will grow worse and worse, deceiving and being deceived.’ II Timothy 3:13

But as members of the body of Christ, we shouldn’t be surprised but instead, we should expect persecution. We are promised to be hated, persecuted, and even killed by the Christ-hating world around us. Look at these verses…

1 Peter 4:12 – Beloved, do not be surprised at the fiery ordeal among you, which comes upon you for your testing, as though some strange thing were happening to you.

‘For to you it has been granted on behalf of Christ, not only to believe in Him, but also to suffer for His sake,

‘For to you it has been granted on behalf of Christ, not only to believe in Him, but also to suffer for His sake,’

and not in any way terrified by your adversaries, which is to them a proof of perdition, but to you of salvation, and that from God.