Locking Down American’s is in Direct Opposition to our Country’s Founding: Despite Soaring Body-Count Across The Nation, Americans Continue To ‘Resist’ Lockdown Orders 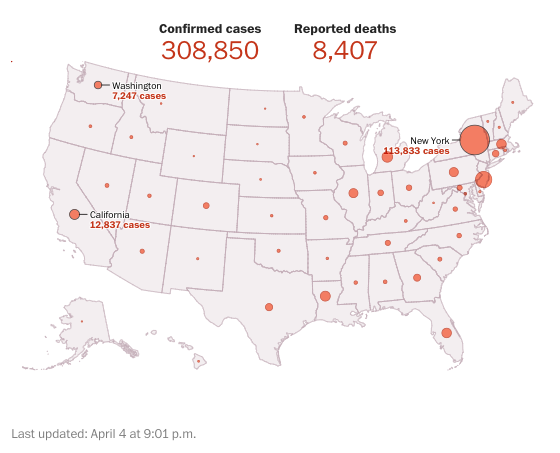 Traffic analytics firm INRIX transportation told The Washington Post that daily traffic nationwide remains around 60% of normal levels. The highways are still filled with vehicles as many resist public health lockdown orders: “In California, where a stay-at-home order took effect March 19, daily trips statewide remain at 58% of normal levels, according to Wejo, a British company that collects data from sensors in some passenger vehicles. On Wednesday – two days after the District of Columbia, Virginia and Maryland enacted stay-at-home orders – daily car trips in the region remained at 51% of normal in D.C., 53% in Maryland and 59% in Virginia, according to Wejo, which does not include trucks or other commercial vehicles. Washington state officials announced a stay-at-home order March 23. More than a week later, distances traveled on Seattle roads remained at about 55% of normal, according to INRIX, a Kirkland, Washington-based traffic analytics firm that crunches data from vehicle navigation systems, cellphones and other devices,” reported The Post. With traffic halved across major metros and along many highways is unprecedented – it’s becoming evident that plenty of Americans are still on the roads despite strict stay-at-home public health orders across the country. “Some of the remaining traffic, experts say, stems from motorists heading to and from the many worksites that have been deemed “essential”: health-care facilities, supermarkets and liquor stores, construction sites, banks, dry cleaners, hardware stores, pet stores, government facilities, […]

← Prev: Alicia Keys Rejected Abortion: “How Could I Take Away the Potential for This Beautiful Child” Next: Coronavirus stay-at-home order in California has police giving citations to people watching sunset at beach →