CNN Blames Coronavirus on President Trump: He’s a “Cult Leader Who is Jumping Off the Cliff” 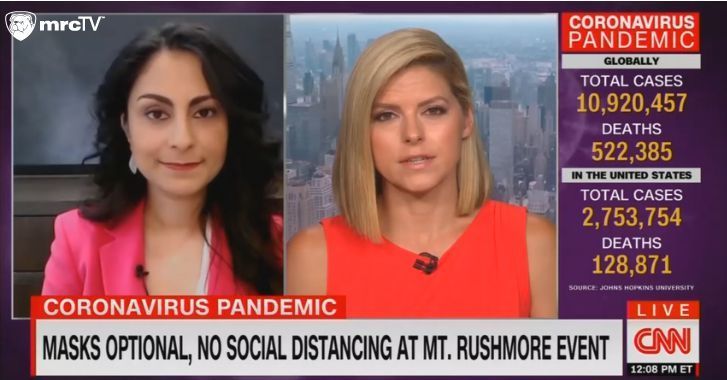 What was supposed to be a medical discussion on Friday’s edition of CNN Newsroom transformed into a full-blown partisan attack on President Trump. Rather than offer medical analysis, CNN medical analyst Dr. Celine Gounder used her platform to add to the relentless media criticism of President Trump’s decision to hold an outdoor celebration of American history at Mount Rushmore.

At the beginning of her interview with Gounder, host Kate Bolduan urged her guest to take “the politics out of it” and focus on “the science and the data” with regards to the risks of holding an outdoor event where “there will be no social distancing program in place.” Instead, Gounder launched an attack on the President as a cult leader.

Dr. CELINE GOUNDER: This is beyond irresponsible. This is the behavior of a cult leader who is jumping off the cliff except he’s jumping off into a safety net where he has protections around him. People around him are being tested, he’s being tested on a regular basis while he asks his followers to jump off a cliff into nothing.

Gounder must have concluded that her outrageous statement would lead to more frequent appearances on cable news. After slamming Trump’s “extremely dangerous behavior,” Gounder made a point that actually has some truth to it: “Unfortunately, this has become so politicized where you abide by public health and scientific recommendations on the basis of your political beliefs, not based on the science.”

As if she and CNN had nothing to do with politicizing it?

And Gounder can thank the liberal media for creating that environment. After all, the media seemed to have no problem that the people who attended the protests in the wake of George Floyd’s death where social distancing was an afterthought decided to ignore “public health and scientific recommendations” because they sympathized with their political beliefs. But when the President wanted to start holding rallies again, the media suddenly cared about social distancing again.

A look at Gounder’s appearances on CNN in June (and she’s mostly on when everyone’s asleep) doesn’t find her calling “racial justice” protests “beyond irresponsible.” CNN wouldn’t ask about that.

When Gounder finished her ideological rant, Bolduan claimed that Trump “continues to deny the reality of the data and the science that is coming in” and “continues to lie to the public in the face of a public health crisis.” At this point, Gounder jumped back in and accused Trump of “gaslighting on an enormous scale.”

The insanity and hostility toward the President continued for the rest of the day, with a CNN reporter calling Mount Rushmore “a monument of two slave owners” and the network censoring Trump’s Mount Rushmore speech. So much for CNN holding itself up as “the most trusted name in news.”

Oddly enough, this attack on patriotic gatherings as suicidal was brought to you by Liberty Mutual…

A transcript of the relevant portion of Friday’s edition of CNN Newsroom is below.

KATE BOLDUAN: Joining me right now is CNN Medical Analyst Dr. Celine Gounder. She’s a Professor of Medicine & Infectious Diseases at NYU’s Grossman School of Medicine. It’s good to see you again, Doctor. Taking the politics out of it and focusing in on the science and the data, if you have an event that is out…that is outdoors, 7,500 people are expected, face coverings not required. There will be no social distancing program in place. What would your level of concern be here?

DR. CELINE GOUNDER: Well, Kate, I’m highly concerned. This is beyond irresponsible. This is the behavior of a cult leader who is jumping off the cliff except he’s jumping off into a safety net where he has protections around him. People around him are being tested, he’s being tested on a regular basis while he asks his followers to jump off a cliff into nothing. I mean, this is extremely dangerous behavior and unfortunately this has become so politicized where you abide by public health and scientific recommendations on the basis of your political beliefs, not based on the science and people are really going to be harmed as a result of this.

BOLDUAN: I…I want to ask you because the President very clearly continues to deny the reality of the data and the science that is coming in and ignore medical experts who have, you have to assume are telling him what they say in public to him if he would ask. I want to read you guys a tweet that the President put out overnight. He said “There is a rise in Coronavirus cases because our testing is so massive and so good, far bigger and better than any other country. This is great news, but even better news is that death, and the death rate is DOWN. Also, younger people who get better much easier and faster!” The HHS official who was in charge of testing, he had to fact check the President in front of Congress yesterday on that bit about the rise in cases is because of testing. We know that’s not true. This morning, the Surgeon General was forced to fact check what the President tweeted about the death toll and the death rate. Listen to this.

DR. JEROME ADAMS: We know that deaths lag at least two weeks and could lag even more. Remember, in the beginning, nursing homes were hit really hard and the majority of our deaths were occurring in people who were 60, 65 and older. Now the majority of cases are in people who have an average age of 35 and so those folks are going to have less co-morbidities, they’re going to be less likely to end up in the hospital and to die.

BOLDUAN: Yeah. That might be true, that last bit, which is good news but the death toll, you can’t celebrate it right now when you’re seeing people heading into the hospital right now. No matter how many times public health officials, especially like Anthony Fauci, are speaking the truth, what does it do, Doctor, when the President continues to lie to the public in the face of a public health crisis?

GOUNDER: Well, this is gaslighting on an enormous scale and it means that until people eventually get sick or their family members get sick, that their communities are hit just as hard as we were here in New York City, they won’t believe it and by then it will be too late. The problem is there’s a lag period from the time that somebody’s infected, then they start to develop symptoms a couple days later. We don’t really see people get severely sick and need to be hospitalized and…and in ICUs until at least a week into disease. So, you’re talking about probably one to two weeks of lag time from the time somebody’s exposed at least before you start to see hospitalizations and then another couple weeks before you start to see deaths. I still today, you know, just…just wrapped up a two-week block on service at the hospital. We still had patients who had been in the hospital since March or April. And while we’re not seeing a lot of new patients in the hospitals in New York, people are sick for a very long time with this so this is not a small…a small surge in deaths and hospitalizations. This is going to be for the long haul across the country.