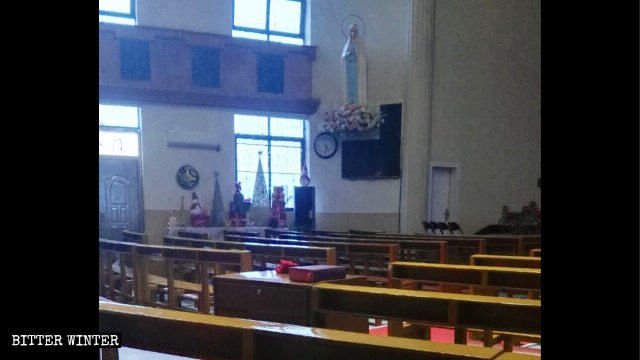 The Saiqi Catholic Church before it was closed down. Catholic conscientious objectors from the Mindong Diocese in the southeastern province of Fujian are calling for urgent help, as the Chinese government started resorting to torture while pressuring them to join the Chinese Patriotic Catholic Association (CPCA). As foreseen in the Vatican Guidelines of 2019, priests and bishops may remain outside the CPCA for reasons of conscience, but the regime uses any means possible to completely transform what used to be known as the Underground Catholic Church before June. A priest deprived of sleep for four days. A Catholic from the diocese reported that government officials took away Father Huang, a priest from the parish in Saiqi town, administered by Fujian’s Fuan city, on April 2. For four days, the priest was subjected to a torture method called “ exhausting an eagle,” when people are deprived of sleep for extended periods. “Fr. Huang’s residence was under surveillance, and that day, at about 4 p.m., the police pried open the door and forcibly carried him away,” the churchgoer said. “More than a dozen personnel took part in the operation.” That evening, national security officers escorted Fr. Huang to a remote secret interrogation facility and confined him to a small room equipped with a surveillance camera. The priest had strong lights shown in his eyes 24 hours a day, as officers took turns watching him, threatening to keep him in detention for as long as he refused to join the CPCA. Before signing, Fr. Huang asked to add to the CPCA application a statement that “he will remain faithful to the Catholics doctrine”— as is […]

‘For this cause also thank we God without ceasing, because, when ye received the word of God which ye heard of us, ye received it not as the word of men, but as it is in truth, the word of God, which effectually worketh also in you that believe. For ye, brethren, became followers of the churches of God which in Judaea are in Christ Jesus: for ye also have suffered like things of your own countrymen, even as they have of the Jews: Who both killed the Lord Jesus, and their own prophets, and have persecuted us; and they please not God, and are contrary to all men: Forbidding us to speak to the Gentiles that they might be saved, to fill up their sins alway: for the wrath is come upon them to the uttermost. But we, brethren, being taken from you for a short time in presence, not in heart, endeavoured the more abundantly to see your face with great desire. ‘