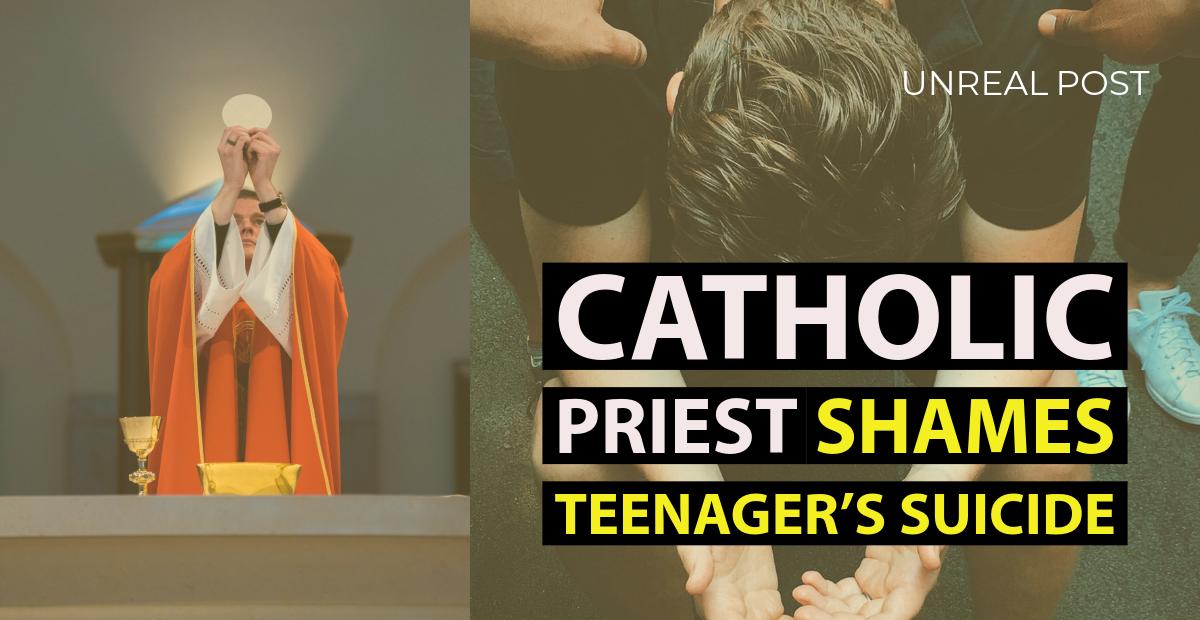 Loss of life in any situation is tragic for all involved but to lose your own child is an even deeper pain. No matter how that death occurred. What this Catholic Priest did was deliberate and wicked and in no way represents Christian love. I pray for this family and their loss.

‘Be anxious for nothing, but in everything by prayer and supplication, with thanksgiving, let your requests be made known to God; and the peace of God, which surpasses all understanding, will guard your hearts and minds through Christ Jesus.’

The article below is written by Will Maule. Source: .com

[Lifewire by Will Maule December 17, 2018]  The parents of a Michigan teenager who committed suicide have been left devastated after a Catholic priest condemned their son’s final actions during his funeral. University of Toledo freshman Maison Hullibarger took his own life December 4, and the family had organized his funeral to take place on December 8 at Our Lady of Mount Carmel Catholic Church with their local priest presiding over the service.

Shockingly, however, Father Don LaCuesta took the opportunity to slate Maison as a sinner for committing suicide and even questioned whether the youngster had “repented in the eyes of God.” On numerous occasions, the priest openly doubted that the avid football player had managed to reach heaven following his death. The family protested his remarks, but still, the minister continued on his ghastly rant.

Hullibarger’s parents, Jeff and Linda, had met with the priest prior to the service to specify what they would like him to say.”We wanted him to celebrate how Maison lived, not how he died,” Maison’s mother said.

So when the priest took it upon himself to preach a hard-hitting sermon about the sinfulness of suicide, Jeff stormed up to the pulpit and demanded he cease. “Father, please stop,” he whispered, hoping that the clergyman would have enough decency about him to quit slandering the deceased. But still, LaCuesta continued.

“He was up there condemning our son, pretty much calling him a sinner. He wondered if he had repented enough to make it to heaven. He said ‘suicide’ upwards of six times,” Jeff explained to the Detroit Free Press. “There were actually a couple of younger boys who were Maison’s age who left the church sobbing.”

Then, when it came time for the dad to eulogize his own son, LaCuesta attempted to end the mass.

“I had words prepared, but when [the priest] was done, he was going to finish mass without giving anybody else the opportunity to say anything. He had the organist start playing and they were going to roll the casket out — some nerve,” Jeff told DFP. Hullibarger said that many in attendance noted that the priest had “a smirk on his face” during his insensitive remarks.

Maison’s high school football coach, Jeffrey Wood, also attended the funeral on Dec. 8 despite allegedly bullying Maison and his brother relentlessly during their time at Bedford High School. Hullibarger’s parents specifically requested that Wood not attend the memorial as a result, but he ignored the grieving couple’s request and showed up.

“We knew Maison would not want him at his funeral. He did not treat Maison kindly. So it was our wish that he would not be there,” Linda told the outlet.

One of the couple’s sons promptly asked the coach to leave. Later, he posted this shocking message to Facebook, which ultimately resulted in him being fired from his job:

To read the despicable response by the coach and the rest of the article click here.