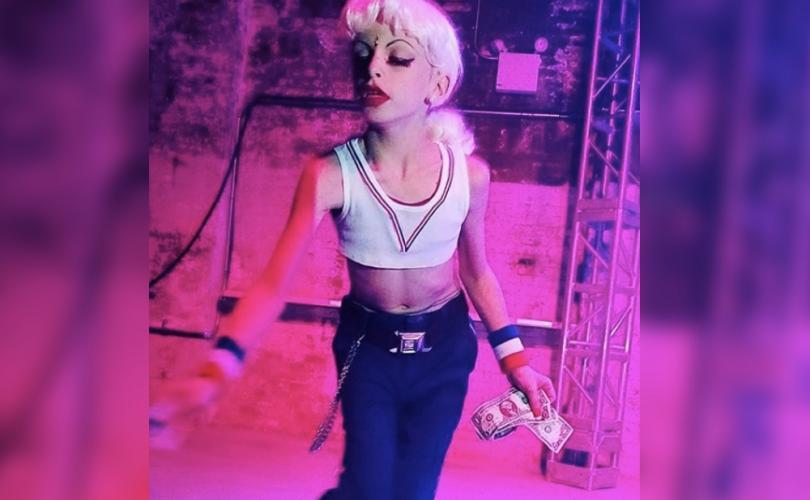 Sin is a sin. It’s all the same to God. As a Christian, it is hard not to get emotional when seeing an 11-year-old boy dressed up in drag in a nightclub surrounded by other men. Our immediate response is how could the parents allow their child to do this! What’s the matter with these people are they sick! This is child abuse someone should have them arrested!

I don’t disagree with much of what is being said. I personally believe that this is child abuse! This is the LGBTQ crowd’s attempt to normalize this behavior sick behavior to move on step closer to the legalization of Pedophilia.

It’s important for believers to stick to what the Bible says is the problem. After reading the article below I recommend you read The Fall of Mankind – Sin, Death and the Curse so that you will know why this type of abject wickedness and sin is so prevalent today. The only place Christians should seek answers to tough questions or mind-boggling situations such as this one is the Word of God.

The world needs the Gospel. Share the Good News. Jesus Christ died for the whole world and paid the price for all the sin of the world; past, present, and future sin of all mankind. All anyone has to do is believe it. Faith plus nothing.

The Article below was written by Doug Mainwaring. Follow Him. Source: LifeSiteNews.com

NEW YORK, New York, December 17, 2018 (LifeSiteNews) – Perhaps sensing the horrific optics of the event, LGBT news sites have assiduously avoided reporting that their favorite 11-year-old drag kid “Desmond Is Amazing” danced on stage in a New York gay bar while adult male patrons tossed money his way as if he were a male stripper.

While none of the major LGBT news sites have chosen to highlight Desmond Is Amazing’s performance at the club, some liberals and gays have taken to social media to criticize – if not condemn – the event.

“11-year-olds are too young to be performing at bars. This should not be legal,” declared “God is not Real” on Twitter, adding, “I’m a liberal democrat.”

“I left after seeing a child dance on stage for money at nighttime. This was on Saturday night and I have been feeling disturbed ever since,” said a patron on Yelp.

Another said the club “exploits children and sexualizes them in the wee hours of the morning,” and then warned it “has provided just the ammunition to homophobics everywhere and endangered the community.”

Other patrons complained on Yelp about the club’s “weird no cell phone policy.”

The disturbing event was first reported by Yosef Ozia of Ozia Media in a YouTube video, which was in turn reported by Milo Yiannopoulos’s Dangerous website.

Desmond Napoles, who goes by the drag stage name “Desmond Is Amazing,” is barely 11 years old, yet homosexual and mainstream media have thrust him into the spotlight as the face of the growing prepubescent gay/transgender movement.

ABC’s “Good Morning America” (GMA) recently devoted a segment to the boy during which his cross-dressing was celebrated as an example of individuality, and his parents were praised for their support of his drag hobby.

The segment also treated Napoles to a surprise visit by “iconic drag queens” Hedda Lettuce, Shannel, and Alyssa Edwards. The performers lavished praise on the boy’s activities as “courageous,” “inspirational,” and “the future of drag.” They also presented the boy with a number of gifts, including a gift basket of makeup, a unicorn bag with fake nails and other assorted items, and more.

Desmond has been featured in New York City’s homosexual “Pride Parade” more than once.

His online biography states that he was born in Manhattan during NYC Pride Week in June 2007 and that he “came out of the closet when he was born”:

Desmond has been the undisputed and most beloved young star of NYC Pride since 2015 when he danced his way into everyone’s hearts at the NYC Pride March in his choice of a rainbow tutu and sparkly gold beret.  Overnight, Desmond’s story was featured on NewNowNext, Yahoo, Perez Hilton, and Out Magazine. Quickly, he became an internet sensation and was well-known by millions worldwide.  Desmond’s mother’s acquaintance created a Facebook Fan Page, called “Desmond is Amazing” to share his continuing journey with others.  The name stuck, and Desmond decided to use it as his official stage name.

Criticism from social conservatives has been equally critical.

“The Left is applauding the sexual abuse of this child,” tweeted Matt Walsh. “This is why decent and rational people want nothing at all to do with Leftism. It openly promotes, advocates, and celebrates child sexual abuse.”

“The Left is applauding the sexual abuse of this child,” tweeted Matt Walsh. “This is why decent and rational people want nothing at all to do with Leftism. It openly promotes, advocates, and celebrates child sexual abuse.”

“His mother recently posted that he is autistic and has difficulty interacting with people which makes it all even worse,” noted another on Twitter. “Why are they exploiting their own child like this? It’s sick.”

“A 10-year-old kid who calls himself ‘Desmond Is Amazing’ was allowed to dance on stage at a gay bar in Brooklyn 2 weeks ago while half-naked men showered him in money,” observed “Educating Liberals.”

“This is called pedophilia,” continued the tweet, which quickly elicited nearly 850 responses. “His parents should be arrested & the bar should be closed down.”

The world needs the Gospel. Share the Good News. Jesus Christ died for the whole world and paid the price for all the sin of the world; past, present, and future sin of all mankind. All anyone has to do is believe it. Faith plus nothing.

← Prev: Catholic Priest Disgustingly Uses Pulpit to Shame Dead Teenager for Committing Suicide Next: The Secret Archive of the Warsaw Ghetto "Who Will Write Our Story" →