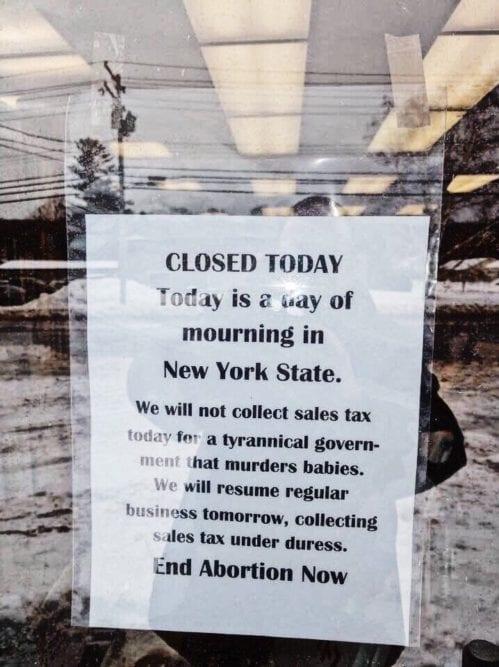 A New York business owner urged his city council to become a “sanctuary” for unborn babies Monday after he closed his bookstore in protest of the new state pro-abortion law.

John Speed, owner of The Book Scout in Syracuse, told the Batavia City Council that they should take a stand against abortion by “support[ing] what is good while punishing what’s evil,” WND reports.

In January, New York Gov. Andrew Cuomo signed a radical pro-abortion law that allows unborn babies to be aborted for basically any reason up to birth. The action prompted a huge public outcry, and Speed closed his bookstore for a day in protest, refusing to collect sales tax to support the pro-abortion law. Batavia City Council members also decided to take action after a local resident urged them to stand for life.

On Monday, pro-life advocates and abortion activists showed up to voice their opinions about the city council’s plans.

Then, the bookstore owner described the violent ways in which unborn babies are killed in abortions.

“What is the best way to kill a baby?” Speed asked. “Using an abortifacient? Or saline abortion — where the baby is burned alive in its mother’s womb? Or is it a surgical abortion in the second trimester when the baby is cut into pieces and then reassembled in a dish? Perhaps it is to deliver the baby in the third trimester and then stick a pair of scissors into his or her neck.

The council decided to take action in January after local resident Chris Connelly urged them to stand for life. A disabled Marine veteran, Connelly said the city should become a “sanctuary for the unborn” much as other cities have declared themselves to be sanctuaries for illegal immigrants.

Council members responded with plans to draft a letter in opposition to the state pro-abortion law, and consider adopting the letter in February.

The New York law allows unborn babies to be aborted for any reason before viability and up to birth for “health” reasons, a broad category that includes basically anything. It redefines a “person” as “a human being who has been born and is alive,” and describes abortion as a “fundamental right.” The law also removes state protections for infants born alive after botched abortions.

It poses serious dangers to women’s lives and rights as well. By removing protections from illegal abortions, the law will open the door for abuses. Back alley abortionists, abusive partners or parents and others no longer will face charges for illegally killing an unborn baby – even if the mother wants her child.

Many have called for the so-called Catholic governor to be excommunicated. Condemnation has come from religious leaders of other faiths as well. Earlier this week, a coalition of Jewish leaders warned that euthanasia may be next.

“Under the guise of progressivism, New York is taking us back to a primitive age when infanticide was also accepted — and the fact that these ‘progressives’ want to take up euthanasia next should surprise no one,” said Rabbi Steven Pruzansky, a leader of the Coalition for Jewish Values.

Polls indicate the new law is radically out of touch with most Americans’ views on abortion.