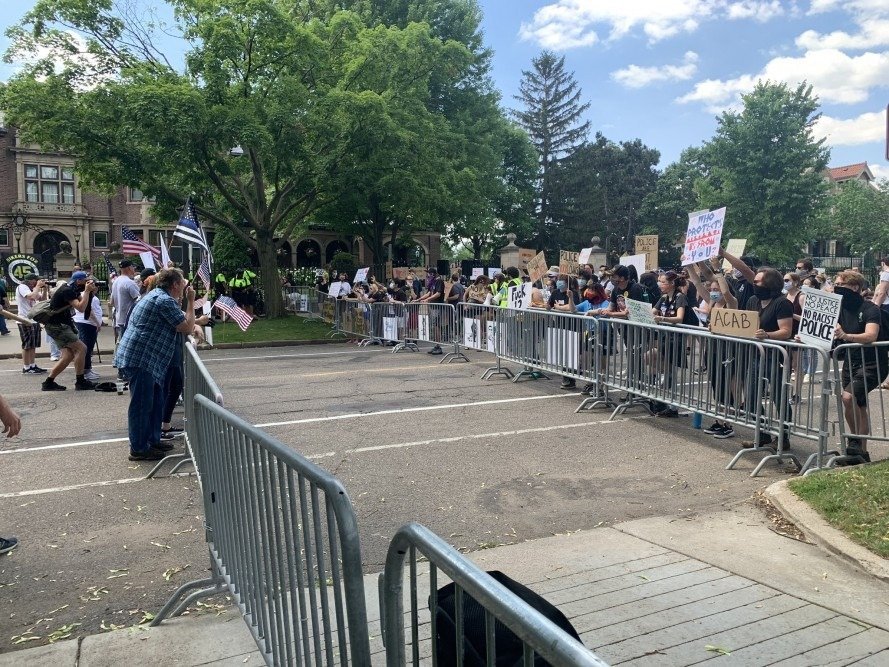 Protestors in complete opposition of each other faced off for several hours Saturday afternoon outside the Governor’s Residence in St. Paul, Minnesota

One group was there for a “Support the Police” rally, sponsored in part by the group Bikers for 45 Minnesota, which backs President Trump. The other group of protestors was Black Lives Matter pushing for the abolishment of the police.

Photos and video show two groups of people separated by police barricades yelling and screaming back and forth at each other. Also, disturbing video of BLM protestors screaming “Fu-K America” over and over.

The contrast between the two sides was not just distinguished by barricades but by each group’s message.

“Support the police” group of course had signs that were in support of maintaining a police force, law, and order, proud to be an American, and so on.

Small crowds but very tense in front of the Governor’s mansion. Pro-police on one side, BLM and pro defund on the other. Shouting matches abound. @MPRnews pic.twitter.com/0b96H1TMQL

Ultimately the American people will have to choose one or the other.

If you hate God and love death you will probably choose an America run by Marxist under the rule of communism. If you love liberty, freedom, life, God, and law and order you’ll choose our constitutional republic.

What will you choose?