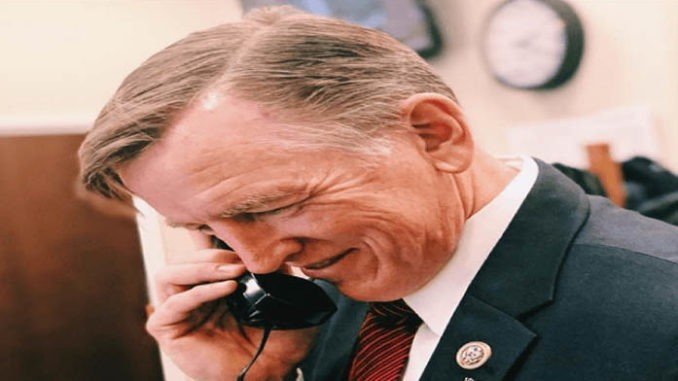 How evil and sick do you have to be, to be an active supporter of Mark Kelly (whose wife ‘Gabby Giffords’ was shot in the head)? To call and threaten the life of another human being by saying “I think it’s totally ok for me to come with my gun and shoot you in the head”.

The Democrat Party is vile and dark. They have the exact traits of their father;  lie, cheat, steal, kill, and destroy.

Original Story by arizonadailyindependent.com below.

A staff member in the district office of U.S. Rep. Paul Gosar, R-Prescott, retrieved voice mails Monday morning, which were left during the weekend. There was a 36-second message on the phone from a woman, who was apparently not happy with the conservative congressman:

“So, the way I see it, since you supported a child rapist who has 65 years of crimes and you are doing shit about COVID, and I’ve had people die, I think it’s totally ok for me to come with my gun and shoot you in the head. That’s what we think of you Mr. Gosar. You’re a murderer supporter and you are just going down. Murderer, murderer, murderer supporter, you are going down. And we’ll make sure we’ll send lots of protestors your way too. You’re a real big fucking piece of shit.”

Her profile picture is a Mark Kelly for U.S. Senate poster.

The woman, who was later identified as a retired school teacher who resides in Glendale, is under investigation by the U.S. Capitol Police, said Tom Van Flein, Gosar’s chief of staff. Van Flein said he had no idea what the woman was referring to regarding a child rapist. The caller, identified as Margaret Kathleen Spangenberg through caller ID, identifies herself on her Facebook page as a retired gifted teacher and licensed insurance agent, whose interests included elections and travel. She posted a video of herself in January 2019, as she instructs a class of first-graders. The voice on the video is similar to that of the recording of her death threat. Her voice on the death threat recording sounds younger than her age, possibly because she has spent much of her time speaking to […]