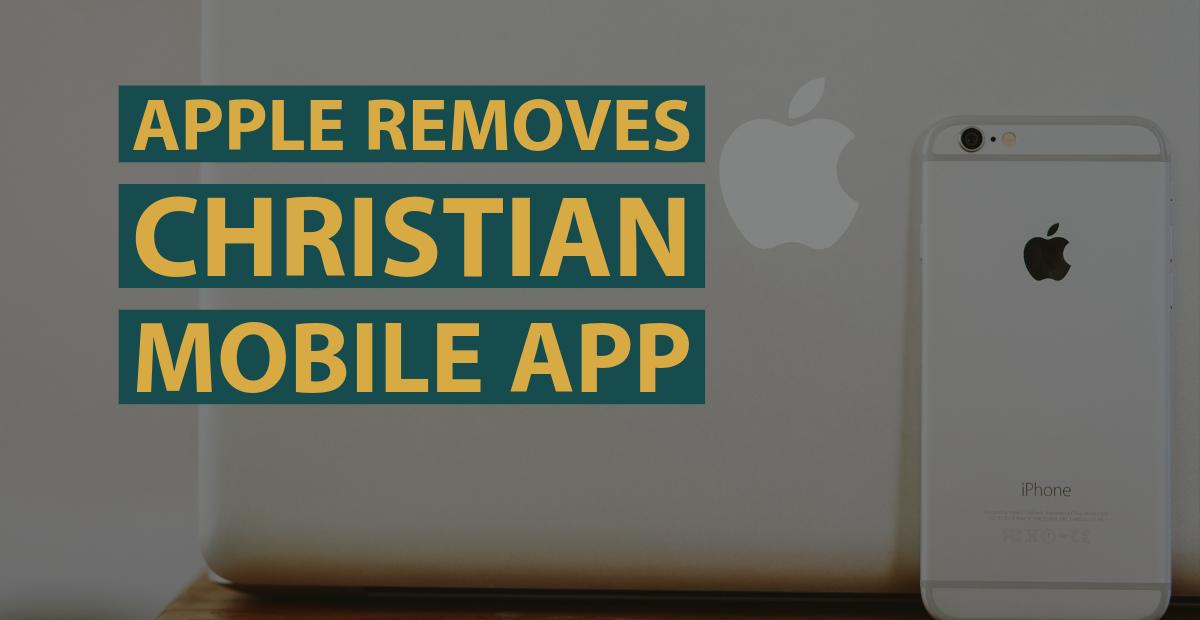 Apple caved under pressure from gay rights group Truth Wins Out and removed a Christian ministry’s mobile app from its store.  Ironic right? The organization that filed the petition name is “Truth” Wins Out. Really?

Psalm 2 He [God] who sits in the heavens laughs [at their rebellion]; The [Sovereign] Lord scoffs at them [and in supreme contempt He mocks them].

They Can’t Handle the Truth

Leviticus 18:22 You shall not lie with a male as with a woman; it is an abomination.

Romans 1:27 And the men likewise gave up natural relations with women and were consumed with passion for one another, men committing shameless acts with men and receiving in themselves the due penalty for their error.

Truth Wins Out, which says it fights “anti-gay religious extremism,” launched a petition Thursday urging Apple to remove the app by Living Hope Ministries, a nonprofit that says it serves “those who are seeking sexual and relational wholeness through a more intimate relationship with Jesus Christ.”

After the decision, Truth Wins Out executive director Wayne Besen said Apple did “the right thing.” “We thank Apple for exemplifying corporate responsibility and taking swift action to remove a dangerous app that stigmatizes and demeans LGBT people,” he said.

“Dangerous App”, says Truth Wins Out’s Wayne Besen! Satan is laying the groundwork for the narrative that sets the stage for ALL the unsaved world to overtly and completely turn against Christians.

“We thank Apple, Google, Yahoo, and the Internet Corporation for Assigned Names and Numbers (ICANN) for exemplifying corporate responsibility and taking swift action to remove the Bible, All Biblical content and websites, and all mobile apps related to the Bible from their indexes. We applaud the corporate world for recognizing that the Bible and the God of the Bible is dangerous because He and His Bible stigmatizes and demeans LGBTQ people.” – Said the Unsaved World.

Romans 1:21 because, although they knew God, they did not glorify Him as God, nor were thankful, but became futile in their thoughts, and their foolish hearts were darkened.

Ricky Chalette, executive director of Living Hope Ministries, however, says the ministry is “saddened” about the decision to remove the app. “Regardless of their decision we will continue to make the app and our services available to those who seek them,” he said. “We are a ministry that for nearly 30 years has helped individuals resolve their feelings they deem incongruent with their faith,” he said. “We help people deepen their relationship with Jesus Christ through Bible study and accountability.

We walk with them to align their lives with the teachings of Jesus Christ. “From chaos and confusion, they often find peace, hope, and a deeper sense of personal wholeness. Our ministry is free and strictly voluntary.”

Ephesians 6:18 With all prayer and petition pray [with specific requests] at all times [on every occasion and in every season] in the Spirit, and with this in view, stay alert with all perseverance and petition [interceding in prayer] for all God’s people.

Such Were Some of You

As Christians, we shouldn’t expect anything less from the unsaved world. We are not to get upset, scream and take the self-righteous road. Never! God is the judge of the unsaved.

1 Corinthians 5:12-13 For what business is it of mine to judge outsiders (non-believers)? Do you not judge those who are within the church ? God alone sits in judgment on those who are outside [the faith].

Romans 1:16 For I am not ashamed of the gospel of Christ, for it is the power of God to salvation for everyone who believes, for the Jew first and also for the Greek.

Do you not know that the unrighteous will not inherit the kingdom of God? Do not be deceived. Neither fornicators, nor idolaters, nor adulterers, nor homosexuals, nor sodomites,

nor thieves, nor covetous, nor drunkards, nor revilers, nor extortioners will inherit the kingdom of God.

And such were some of you [before you believed]. But you were washed [by the atoning sacrifice of Christ], you were sanctified [set apart for God, and made holy], you were justified [declared free of guilt] in the name of the Lord Jesus Christ and in the [Holy] Spirit of our God [the source of the believer’s new life and changed behavior].’

As Christians, persecution is expected, and as the persecution level rises we must stay focused on His Word, rest in His promises and share the gospel. That’s it.

Tell the unsaved world that the God of the Bible loves them so much that He has already forgiven them of their sins. Because God sent His only Son, Jesus Christ to shed His blood and die on the cross to pay the price for the sin of the whole world. Christ was buried in the ground and raised from the dead never to die again. All anyone needs to do is believe it. Believe the gospel and you will be saved.

Romans 10:9 That if you confess with your mouth the Lord Jesus and believe in your heart that God has raised Him from the dead, you will be saved.

If you liked this post please consider sharing it.

← Prev: Abortion is Murder and Ireland Just Made Abortion Legal Next: Shout Your Abortion Founder Tells Kid's It's God's Plan to Have Abortions →