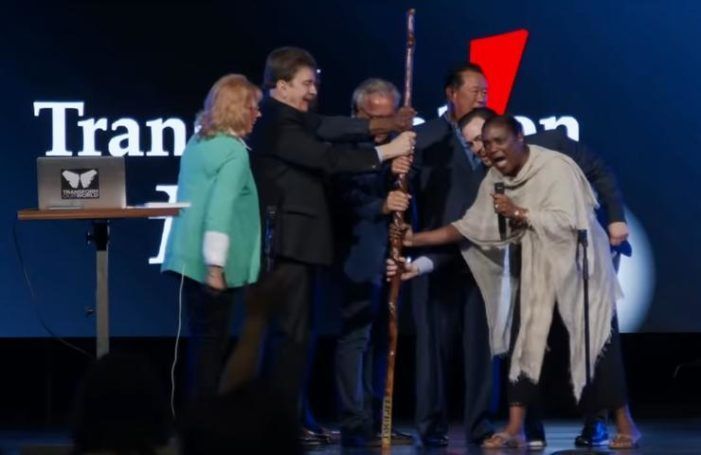 False teachers are horrible! And the apostate’s in this video are horrible. The worst of the worst on planet earth because they are ministers of Satan preaching a false gospel with no power to lift the veil from the eyes of the unsaved. And that’s exactly where Satan wants the unsaved world, lost and eventually joining him in the lake of fire for eternity. – Unreal Post

SAN JOSE, Calif. — During a recent event meant to promote “ethnic reconciliation and social justice,” broadcast on Bethel.tv, “Chicago Med” actress and pastor Marlyne Barrett, along with Harvest Rock Senior Pastor Che Ahn, Harvest Evangelism’s Ed Silvoso, and Bethel Church’s Bill Johnson, engaged in a bizarre — but what they called a “prophetic”— act to end racism by reenacting the wizard Gandolf’s “thou shall not pass” scene from the movie based on Tolkien’s “Lord of the Rings.” “We’re going to do some binding and loosening,” Ahn told those watching. “[O]ne of the things that I have learned in the last, maybe around 10 years in that apostles have authority to make decrees and declaration[s].

These are Apostates Leading Many to their doom

It’s something that God gives. I’ve seen it work in so many practical ways.” He explained that Barrett had a “prophetic vision” before the event in which she saw the people doing an act together that would be “very, very historic.” Ahn handed the microphone to Barrett to explain her vision and the consequential “apostolic decree.” Barrett, holding a staff, outlined that one of her favorite movies is “Lord of the Rings” and that during the various messages presented during the event, she felt that the Lord was telling her that she “needed to repent for the participation I had with the racist spirit in America.” She then asked all of those on stage with her to take hold of the staff, as they were going to “command the spirit not only to leave, but he shall not pass.” Barrett, echoing the instructions of Silvoso, asked the people to first anoint their door with oil and then to repeat their declaration, “that the spirit of racism may leave your house, whether you participated as a victim or as someone who did it.” “And we […]

Wolves in sheep’s clothing. And these wolves are destroying the flocks

‘These are wells without water, clouds carried by a tempest, for whom is reserved the blackness of darkness forever.’

“These.…” Who are the THESE Peter is talking about? False teachers; like Bill Johnson, Marlyne Barrett, Che Ahn, and Ed Silvoso. This motley crew of false teachers on full display in this bizarre video above using a character from the movie “Lord of the Rings”, Gandolf to make a decree to end racism. Horrors!

These are emissaries of Satan who are under the curse in Galatians 1:8,9. They are deceitful workers, transforming themselves into apostles. This is exactly what Paul was referring to in 2 Corinthians 11:13,14.

‘For such are false apostles, deceitful workers, transforming themselves into apostles of Christ. And no wonder! For Satan, himself transforms himself into an angel of light. Therefore it is no great thing if his ministers also transform themselves into ministers of righteousness, whose end will be according to their works.’

They care nothing about the truth, or how accurate they are with the Scriptures – they will use the Scripture for sure; that’s how they get people hooked. They use the Scriptures and they feed the multitudes with their lies. “Deceivers” is what false teachers are, minsters of light that come in with their smooth words and worldly gimmicks to appeal to the flesh of the unsaved. False teachers don’t just come into a pulpit and say, ” I’m going to deceive you with falsehoods and made up theology.” No. They say everything they know people want to hear and people fall for it by the millions. Back to 2 Peter 2:15…

…wells without water…  Peter uses a water well as an example because that would be hugely important to anyone living in the middle eastern desert at that time. So these false teachers are like a water well where thirsty people that are dying to drink could see the well from a far off but when they finally made it there would find it to be a well without water. That’s exactly what false teachers do, they get the masses excited and hopeful but there is nothing to sustain them.

…clouds carried by a tempest, for whom is reserved the blackness of darkness forever. Clouds on the horizon would indicate much-needed rain and would be a great encouragement to those in need of water but as the clouds get closer they would disappear and no rain, no substance. Just like false teachers, they sound great with promises of fortune and healing using gimmicks to tickle the ears but zero substance. Leaving their followers in despair, never able to break free of the domain of darkness.

False teachers are horrible! And the apostate’s in this video are horrible. The worst of the worst on planet earth because they are ministers of Satan preaching a false gospel with no power to lift the veil from the eyes of the unsaved (2 Corinthians 4:3,4). And that’s exactly where Satan wants the unsaved world, lost and eventually joining him in the lake of fire for eternity.

God has a special place in the lake of fire for these false teachers.

‘My brethren, let not many of you become teachers, knowing that we shall receive a stricter judgment. ‘