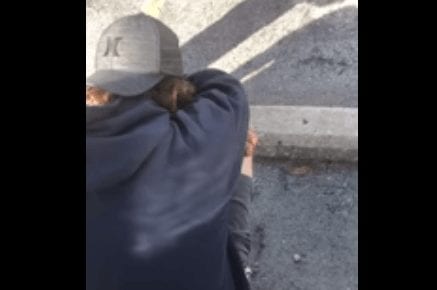 “Father’s Day weekend nightmare. This father is kneeling at the doors of this abortion mill crying out hysterically for the life of his child,” Ryan wrote

The video was posted to social media on Friday by a man named John Ryan and has generated over 44,000 Facebook views as of press time. A separate brief recording shows the young man sitting on the sidewalk with his face buried in his arms, still distraught.

“Whatever happens, son, you’ve done the right thing,” a voice can be heard saying.

“Father’s Day weekend nightmare. This father is kneeling at the doors of this abortion mill crying out hysterically for the life of his child,” Ryan wrote.

The man, whose name is Tyler, explained to pro-life sidewalk counselors that Abby’s stepmother had brought her there for an abortion.

“He said she has three other children at home, including a 4 1/2-year-old who is very much aware that mom is pregnant and looking forward to the birth of her sibling. He said they planned this baby,” Ryan explained.

A number of those who support abortion “rights” have commented under the video to mock it or claim that the man was funny or fake.

“I can’t stop laughing! I keep watching this video over and over again, crying because I’m laughing so hard,” one commenter wrote. “What a [expletive] moron.”

“Almost laughed at his wailing,” another stated. “Don’t have sex with someone who doesn’t want your kids or have the same views on family planning as you do and you won’t have this problem.”

“Sir, that is a fetus you are throwing a tantrum over,” a third remarked.