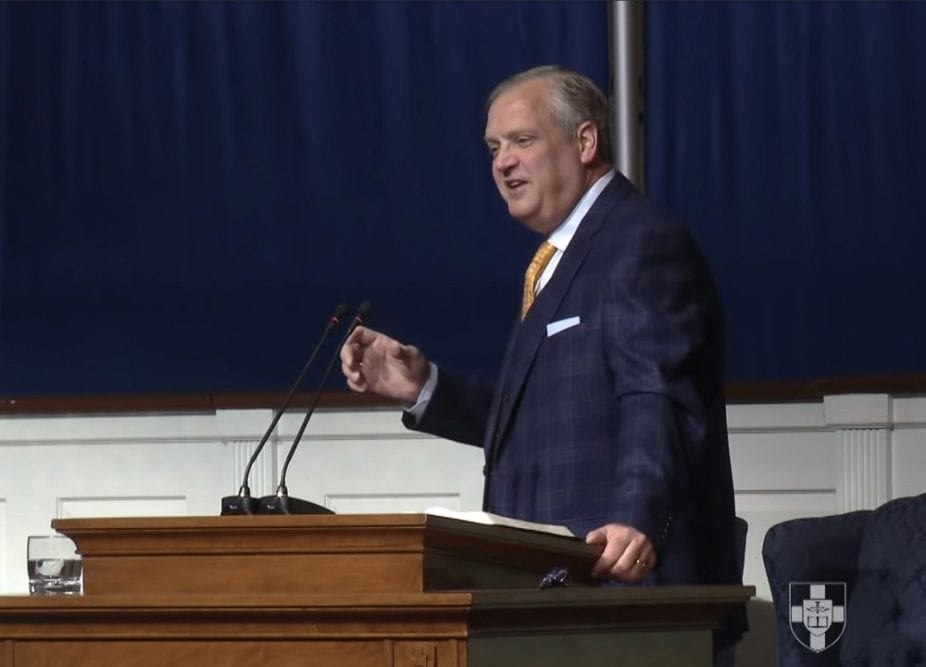 The largest Protestant denomination in North America, the Southern Baptist Convention (SBC), officially adopted “critical race theory” and “intersectionality” as “analytical tools” to be used in fostering racial reconciliation in the church.

Before we get to why, let’s look at how it happened. The convention adopted “Resolution Nine—On Critical Race Theory and Intersectionality” during its annual meeting last week. The resolution instructs Southern Baptists that while these “tools of analysis” can be employed, it must be done in subordination to the Bible.

The Committee on Resolutions, chaired by Dr. Curtis Woods of Southern Baptist Theological Seminary, took just more than an hour directly before the meeting’s scheduled dinner break to pass some 13 resolutions, including resolution nine. The committee spent the first 45 minutes on resolutions one through eight. Then the meeting’s chair and SBC president, Pastor J.D. Greear, called for a motion to pass resolutions nine through 13 as a package.

Because the meeting follows strict parliamentary rules, the chair’s suggestion could only be done without objection. Only resolutions 11 and 13 were left as a package; Nine was the first to be ferreted out for debate as a stand-alone resolution. By the time this was done, the time allotted for the Committee on Resolutions had expired. Greear then extended the debate time.

Angela Um presented resolution nine. As she approached the microphone, she said, “Oh boy…here we go,” before making the motion to adopt the resolution. She then directed the messengers to read the resolution in a pre-printed handout and moved that the resolution be adopted.

During debate, Pastor Tom Ascol offered a friendly amendment that stated that critical race theory and intersectionality are incompatible and indeed antithetical to Christianity. The amendment was rejected as “friendly” by Woods and defeated soundly when put to a vote on the floor. As he rejected the motion, Woods stated, “critical race theory and intersectionality are simply analytical tools…they are to be used as a tool, not as a worldview.”

But that’s simply not true. Critical race theory is essentially literary deconstruction applied to culture, politics, and economics. According to Jacques Derrida, the father of deconstructionism, it is impossible for people to understand one another. They can only come up with their own interpretations of what others say. Thus, Derrida encouraged his students to identify in any work of literature a “binary.” That is a pair of characters or groups of characters that often are at odds.

The most obvious example of this applied to politics and culture currently is critical feminist theory. The transsexual movement is the perfect example of the final step in the deconstruction of the terms “male” and “female.” Here these terms only mean what any given individual wants them to mean. They have absolutely no objective meaning.

If traditional Christianity is anything, however, it is utterly dependent on objective truth claims. It cannot survive if truth becomes merely based on one’s lived experience or relativism. For critical theorists, the notion of truth doesn’t exist. What is true is what subverts.

If a certain way of looking at the world disrupts the status quo, then that viewpoint is true for the critical theorist. Despite that, we have the SBC, normally known for its strict adherence to the objective truth claims of the Bible, endorsing this approach as legitimate.

In his latest edition of “The Briefing,” the influential Dr. Albert Mohler, president of Southern Theological Seminary, said of the resolution:

According to Pastor Tom Buck (who spoke against the resolution during debate), Mohler was breaking what Southern Baptists refer to as the 11th Commandment. It goes something like, “Thou shalt not publicly criticize a fellow Southern Baptist brother in good standing with the convention.” According to Buck, for Mohler to openly criticize one of his own faculty members should cause all members of the SBC to sit up and take notice.

Buck also opined that the whole proceeding was “very weird” for a normal meeting of the SBC. He had never before seen controversial resolutions lumped together like this at the eleventh hour of a committee report. Buck says that it was, at the very least, a gross mismanagement of the meeting’s time.

critical race theory and intersectionality are founded upon unbiblical presuppositions descended from Marxist theories and categories, and therefore are inherently opposed to the Scriptures as the true center of Christian union…both critical race theory and intersectionality as ideologies have infiltrated some Southern Baptist churches and institutions—institutions funded by the Cooperative Program…critical race theory upholds postmodern relativistic understandings of truth and…divides humanity into groups of oppressors and oppressed, and is used to encourage biblical, transcendental truth claims to be considered suspect when communicated from groups labeled as oppressors.

What On Earth Is Going on with These Southern Baptists?

Pastor Buck put it well in my interview with him following the SBC meeting:

We’re already employing the concepts of Critical Race Theory and Intersectionality…people are not aware of it…and now we voted in a resolution that says it’s okay. I think they [members of the SBC] need to wake up. I think they need to educate themselves on what critical race theory and intersectionality is…they need to realize that the messengers voted for something that we likely don’t understand and we need to understand the gravity of it.

The Southern Baptist Convention is being infiltrated by an ideology that is antithetical to the Christian religion. Sadly, that infiltration is happening right under the noses of SBC members. If they care about their part of the church and want it to continue, Southern Baptists need to investigate these matters for themselves, understand the implications, then work to mount an informed opposition to this activism in their church body.

‘For though we walk in the flesh, we do not war according to the flesh. For the weapons of our warfare are not carnal but mighty in God for pulling down strongholds, casting down arguments and every high thing that exalts itself against the knowledge of God, bringing every thought into captivity to the obedience of Christ, and being ready to punish all disobedience when your obedience is fulfilled.’

What good is speaking up at the 14th hour? It’s not like no one knew about it. Mohler has been dialing it in for a while. When he said, in a recent article about the “Lie of Progressive Christianity”, ” The distortion of God’s Word is the root of all unfaithfulness” I knew he was a low-faith leader and couldn’t do anything to stop the inflow of the clown doctrine that floods the SBC. By the way, it’s the other way around. “Not taking God at His Word (unfaithful) leads to the distortion of God’s Word”.

How can anyone expect change when so-called evangelical leaders don’t understand that unbelief is at the core of all this garbage doctrine and turn from the true gospel.

Not taking God at His Word is at the root of all the problems not just at the SBC but in Christendom in general. Only by standing firm in the truth of the gospel of grace and all that the gospel teaches us (Titus 2:11,12) can a believer first be able to identify false teaching and second, pulverize it with the Truth.