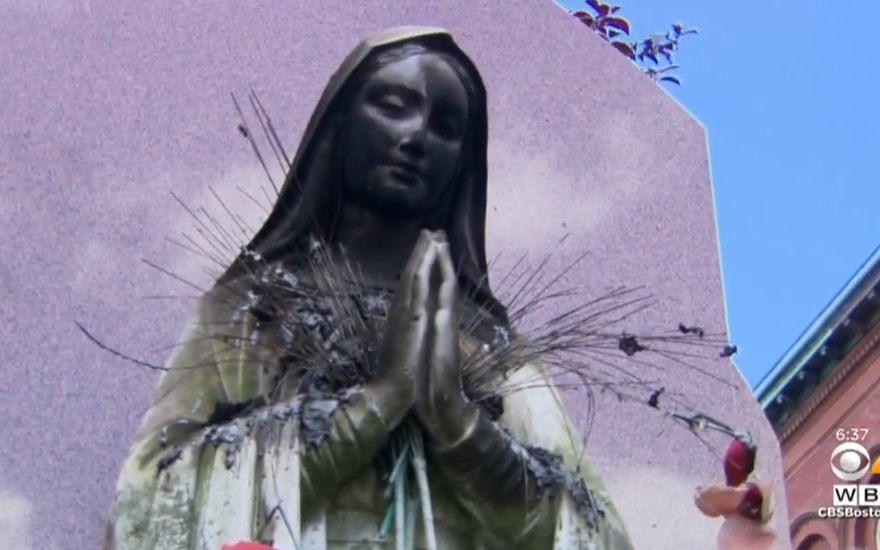 Over the weekend of July 12, at least 5 Christian churches were vandalized by vandals and suspected arsonists

As the media is occupied with the Chinese virus epidemic, there is another terrifying and tragic epidemic that they’re completely ignoring, one that threatens the peace and stability of millions of Americans all the same. Over the weekend of July 12, at least 5 Christian churches were vandalized by vandals and suspected arsonists. But most people haven’t heard about this rash of violence. None of the major news networks have mentioned it. Out of 270 minutes of NBC, ABC, and CBS nightly news coverage for Friday, July 10, Saturday, July 11, and Sunday, July 12, not one second was spent on these violent anti-Christian attacks. Catholic News Agency reported on July 12 that four Christian churches were attacked between Friday, July 10 and Sunday, July 12 throughout the nation.

At two Catholic parishes, statues of the Virgin Mary were defaced. One vandal wrote the word “Idol” in graffiti on Our Lady’s statue at Cathedral Prep School in Queens, NY on July 10. The community’s rector and president, Fr. Kuroly called the vandalism an “Act of hatred.” Another vandal set fire to a statue of Jesus’s mother in St. Peter’s parish in Boston, MA on Saturday, July 11.

The Catholic outlet reported that a 24-year-old suspect rammed his minivan into the entrance of Queen of Peace Catholic Church in Florida on Saturday, and then got out of the vehicle to set the building on fire as parishioners prepared for morning mass. Luckily no one was injured in the blaze. There were two more suspected attacks over the weekend. In California, “a fire ravaged the San Gabriel mission in the Archdiocese of Los Angeles, a 249-year-old mission founded by St. Junípero Serra.” Police have been investigating whether the attack was arson, especially considering statues of famous Catholic missionary Junipero Serra […]

‘Only let your conduct be worthy of the gospel of Christ, so that whether I come and see you or am absent, I may hear of your affairs, that you stand fast in one spirit, with one mind striving together for the faith of the gospel, and not in any way terrified by your adversaries, which is to them a proof of perdition, but to you of salvation, and that from God. For to you it has been granted on behalf of Christ, not only to believe in Him, but also to suffer for His sake, ‘

← Prev: Wickedness: 'ACLU' Biden Should Require Taxpayer Funding of Abortion in First 100 Days as President Next: Hurrah! False Teacher Andy Stanley is Calling it Quits for the Remainder of 2020 →