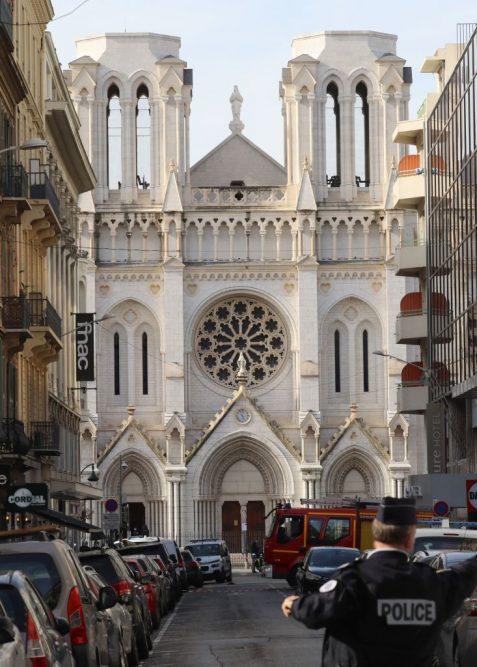 ‘Only let your conduct be worthy of the gospel of Christ, so that whether I come and see you or am absent, I may hear of your affairs, that you stand fast in one spirit, with one mind striving together for the faith of the gospel, and not in any way terrified by your adversaries, which is to them a proof of perdition, but to you of salvation, and that from God. For to you it has been granted on behalf of Christ, not only to believe in Him, but also to suffer for His sake, ‘

A knifeman beheaded one woman in a church and killed another after attacking several people in the French city of Nice on Thursday morning. The man, who has not been named, struck inside Notre Dame basilica in what police say was a terror attack. The news agency Reuters reported that one woman was decapitated and another person murdered while several others were also injured. Mayor Christian Estrosi said on Twitter that the attacker has been arrested by police. Police have cordoned off the area. The exact motive of the attack remains unclear at this stage. The attack comes while France is still in shock following the beheading of French middle school teacher Samuel Paty earlier this month. Paty was beheaded by a man who said he wanted to punish him for showing children cartoons of the Prophet Mohammad. This is a developing story and will be updated as new […]

Click here to view the source of this article www.newsweek.com

← Prev: The Deceptive and Bestial Joe Biden Supports 8-Year-Olds Deciding What Gender They Want to Be 'The Lie of Transgenderism' Next: Pray for America Pray for ALL Mankind Pray for the Men and Women in High Places – Pray! Pray! Pray! →