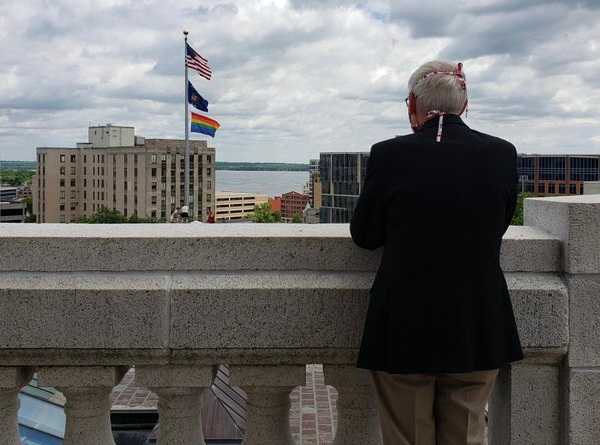 MADISON, Wisc. — Wisconsin Gov. Tony Evers has again directed for the rainbow flag to be raised outside the state capitol building in recognition of homosexual, lesbian, bisexual and transgender Pride Month, and took to Twitter on Saturday to wish residents a “happy Pride Month.” Evers’s office announced the flag-raising via a press release on Thursday, noting that it will fly over the East wing of the capitol through June 30. “Wisconsin is a proud state that recognizes that diversity makes our communities and our state stronger,” Evers said in a statement. “I am proud to once again celebrate the diversity and resiliency of the LGBTQ community this Pride Month and to share this symbol of our commitment to continue to do the work needed to create a more equitable, just and inclusive state for all.” He noted that 2020 marks the second time that the flag will fly over the government facility, as Evers, a Democrat who took office in January 2019, also issued an order last year to have the homosexual pride flag raised over the capitol for the first time in state history. “[T]he rainbow pride flag has become an important visual symbol of support for the LGBT community,” Executive Order 29 read. “[P]ublicly displaying the rainbow pride flag sends a clear and unequivocal message that Wisconsin is a welcoming and inclusive place where everyone can live without fear of persecution, judgment or discrimination.” Evers tweeted a photo of himself viewing the flag, adjacent to the American and Wisconsin flags, on Saturday. “Happy #PrideMonth, Wisconsin!” he wrote. “Pride was born out of a movement not unlike what we see today, and as we celebrate the diversity and resiliency of the LGBTQ community this month, it also is a reminder of the […]