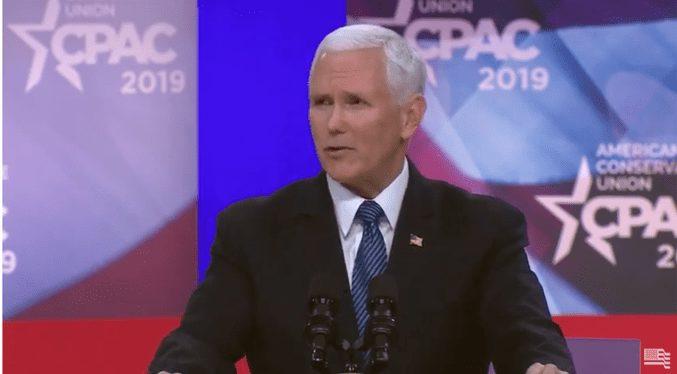 The pro-life vice president said it is a “tragedy” that Democrat lawmakers would not even support a bill to protect infants who are born alive after failed abortions.

“For all the progress we’re making, tragically, at the very moment when more Americans are embracing the right to life, leading members of the Democratic Party are embracing a radical agenda of abortion on demand,” Pence said.

Among the most radical abortion supporters are the Democratic senators who are running for president in 2020, Pence noted. Every single one of them voted against the Born Alive Abortion Survivors Protection Act on Monday. The bill would have protected newborns from infanticide by requiring basic medical care for babies who are born alive after botched abortions.

“In state legislatures across the country, Democrats have endorsed late-term abortion,” Pence said. “The Democrat governor of Virginia openly defends infanticide, and, just four short days ago, Democrats in the Senate – including every Democratic senator running for president – voted against a bill that would prevent newborn babies who survive failed abortions from being killed.”

The Susan B. Anthony named each candidate on Twitter, and promised to hold them accountable for their pro-infanticide vote.

Pence promised that the Trump administration would continue to stand strong for life in America.

“We will always defend the inalienable right to life,” he said, citing the pro-life accomplishments of the Trump administration.

Last week, the administration finalized a new rule to defund the abortion giant Planned Parenthood of about $60 million in Title X tax money. Trump also cut about $100 million from Planned Parenthood’s international arm through his Mexico City policy in 2017.

Pence told CPAC that “life is winning” in America, and polls appear to show this as well. Earlier this week, a Marist poll found a sharp, double-digit uptick in the number of Americans who identify as pro-life after pro-abortion Democrats began pushing abortions up to birth and infanticide. Among Democrats, the gap between pro-life and pro-choice identifiers was cut in half from 55 percent to 27 percent. ← Prev: Democrats Bash Trump for Defunding Planned Parenthood But the Abortion Biz Funds Their Campaigns Next: 80 Democrats in Congress Voted Against Infanticide in 2003, Now Almost Every Democrat Supports It →