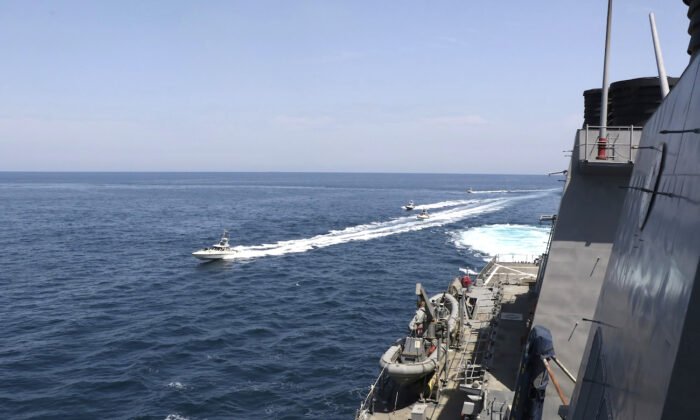 President Donald Trump said he has instructed the Navy to shoot down Iranian gunboats if they harass U.S. ships

The order follows an incident last week in which 11 Iranian boats were filmed buzzing six U.S. Navy ships in the Persian Gulf, coming as close as 10 yards in an hour-long encounter.

“I have instructed the United States Navy to shoot down and destroy any and all Iranian gunboats if they harass our ships at sea,” wrote Trump on Twitter on April 22, adding no further details.

Yesterday, the Iranian military claimed to have added new longer-range anti-ship missiles to their arsenal, and today to have successfully launched their first military satellite after several failed attempts. The developments come following several months of heightened military tensions between the two countries. On April 15 the U.S. Navy revealed footage and images of 11 Iranian vessels coming “dangerously close” to six U.S. vessels. According to the Navy statement, the Iranian Navy ships were “repeatedly crossing their bows and sterns while they were conducting integration operations with U.S. Army Apache attack helicopters to support maritime security outside of Iran’s territorial waters.” “The IRGCN vessels repeatedly crossed the bows and sterns of the U.S. vessels at extremely close range and high speeds, including multiple crossings of the Puller with a 50 yard closest point of approach (CPA) and within 10 yards of Maui’s bow.” The incident lasted for an hour, according to the Navy. The U.S. Navy said the “dangerous and provocative actions” from the IRGCN increased the risk of miscalculation and collision and “were not in accordance with the internationally recognized Convention on the International Regulations for […]

← Prev: 'There Is Power in Prayer': Woman That Survived 9/11 Overcomes 2 COVID-19 Hospitalizations Next: Good Stuff: Under Fire from Many, Samaritan's Purse Finds an Unlikely Champion →