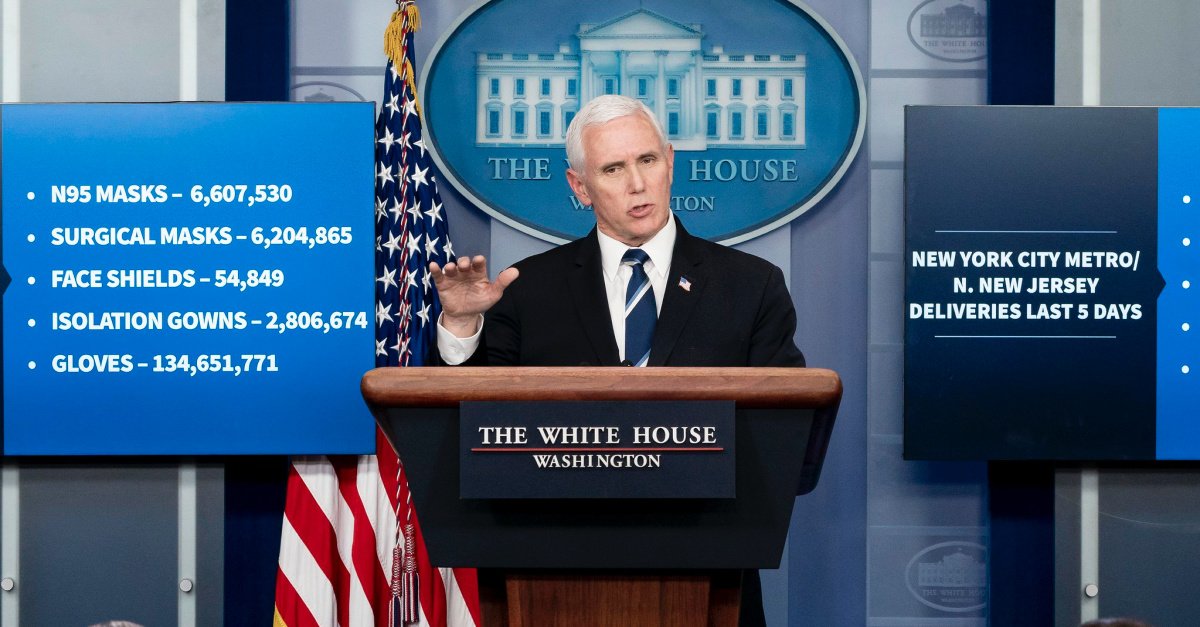 “While we may be physically apart, we can use this time to pray, to reflect, and to focus on our personal relationship with God,”

Vice President Mike Pence on Wednesday said the faith of millions of Americans during the Easter season is a source of hope amidst an uptick in the number of COVID-19 cases and deaths. Pence made the remarks during the daily briefing from President Trump and the Coronavirus Task Force. “In the wake of more than 1.9 million tests, we see more than 400,000 Americans have tested positive for the coronavirus, and sadly, we’ve lost more than 14,000,” Pence said. “We grieve. But as the Good Book says, we do not grieve like those who have no hope. In this very special week, I know that the faith of millions of Americans is a comfort to them.” Trump, too, referenced the Easter holiday.

“This is a holy week, when religious believers across the nation will observe Passover, Good Friday and Easter,” Trump said.

“Millions of Jewish families begin Passover at sundown tonight, a sacred, unbroken tradition that traces back to the ancient land of Egypt. And on Sunday, we celebrate our beautiful, wonderful Easter, which we all look forward to. And we’re going to have many Easters together in churches in the future.” America, he said, is “getting much closer” to defeating the virus and “getting our country back to the way it was.” Trump and Pence spoke to about 10,000 religious leaders Wednesday in an off-the-record conference call “to thank them for raising the spirits of our people during these very difficult days,” Trump said. “While we may be physically apart, we can use this time to pray, to reflect, and to focus on our personal relationship with God,” Trump said. Although a transcript of the conference call was not released, NBC News reported that Trump told the religious leaders, “We’re going to beat this plague.” “We’re going to […]

Unlike the common everyday English usage of the word HOPE, the Biblical, New Testament meaning contains zero uncertainty; but instead is a promise of something not yet realized. It’s going to happen!

For example, no matter what tremendous trials and tribulations believers face we have hope that no matter what may happen to us even in death we are destined to spend eternity with the Lord. And this hope can not disappoint us, because this hope is defined by God Himself, in that, God the Father sent His only Son Jesus Christ, to die in our place, to pay for our sins, was buried and raised from the dead three days later, the gospel. God has promised those who believe this gospel by faith alone; have the HOPE of spending eternity with God.

Therefore, having been justified by faith, we have peace with God through our Lord Jesus Christ, through whom also we have access by faith into this grace in which we stand, and rejoice in hope of the glory of God. And not only that, but we also glory in tribulations, knowing that tribulation produces perseverance; and perseverance, character; and character, hope. Now hope does not disappoint, because the love of God has been poured out in our hearts by the Holy Spirit who was given to us.

We have crystal clear promises from God through His Word. Without His Word, believers have no basis for hope but our faith is documented. Get into your Bible and study don’t just read it, study it.

‘For whatever things were written before were written for our learning, that we through the patience and comfort of the Scriptures might have hope. ‘

New Testament Hope is a certainty of a promise not yet realized.

← Prev: Franklin Graham Shares His Prayer Moment with Trump and His Efforts to ‘Lift up Christ’ During COVID-19 Crisis Next: Iowa Governor Declares Thursday a ‘Day of Prayer’ for Coronavirus Pandemic →