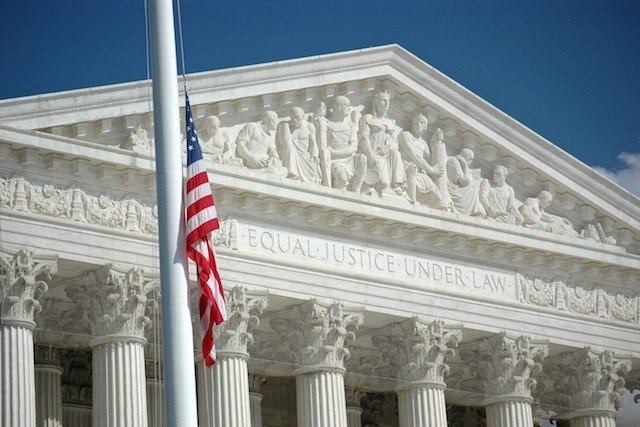 The Supreme Court this morning held oral arguments on a key pro-life law that saves babies from abortion and protects women from dangerous abortions that could jeopardize their lives and health.

But abortion activists suing in June Medical Services v. Russo (previously v. Gee) claim the law is an “undue burden” on access to abortion. The abortion facility Hope Medical Group for Women and the pro-abortion Center for Reproductive Rights law firm are suing to overturn it.

There are two major points at issue. The first revolves around whether the Supreme Court should follow its previous ruling in a similar case from Texas, Whole Women’s Health, where the abortion center sued to stop its  admitting privileges law and won — with the high court deciding that laws protecting women’s health are an undue burden supposedly.

Abortion activists told the court today that they should rule based on the Texas precedent and that’s something Chief Justice John Roberts asked about today:

Chief Justice John Roberts Jr.—appeared focused on how closely the justices must follow their 2016 decision striking down a nearly identical law.

Roberts voted in dissent in the 2016 case, Whole Woman’s Health v. Hellerstedt, which struck down a Texas requirement that abortion physicians have hospital admitting privileges within 30 miles of their clinics.

Roberts on Wednesday in the Louisiana case, June Medical Services v. Russo, asked the same questions of both the clinic’s counsel and Louisiana’s lawyer: Is the inquiry into whether there are any medical benefits the same in each state?

Rikelman answered that while the burdens of these laws may vary state-by-state, the medical consensus is unanimous that they provide no medical benefits, a central holding in the Whole Woman’s Health opinion.

The second issue is whether the abortion business has standing to bring the lawsuit in the first place.

The court also will consider a second important issue in the case: whether abortion clinics have standing to sue on behalf of their patients. Often, it is abortion businesses, not women, who sue to overturn pro-life informed consent laws, health and safety regulations and other laws to protect unborn babies from abortion.

There is a serious concern that the abortion business Hope Medical Group for Women is operating out of its own profitable self-interest rather than the interest of women. And whether only women who have had or might have abortions can sue is a related question.

Louisiana state attorneys told the court: “There is little evidence that their patients’ interests actually align with Plaintiffs’ position that the burdens of such protections exceed their value. On the contrary, undisputed record evidence (including of Plaintiffs’ poor safety record, inadequate credentialing practices, and questionable efforts to undermine the law at issue) shows Plaintiffs are directly adverse to their patients’ interests. It is hard to imagine a worse case for third-party standing.”

And that question of standing came up today:

Rikelman opened her argument by telling the justices, “This case is about respect for the court’s precedents.” However, she quickly ran into a buzzsaw of questions from Justice Samuel Alito Jr. on another significant issue in the case: whether abortion physicians and clinics on their own can sue states on behalf of their patients. A ruling that says only pregnant women can sue could widely reduce complaints challenging state regulatory schemes, reproductive rights advocates contend.

Alito repeatedly challenged Rikelman’s interpretation of the federal trial court’s findings that Louisiana had waived a challenge to the clinic physicians’ standing to sue on behalf of pregnant women. He called “amazing” her reply that there was standing even if a conflict existed between the interests of the physicians and their patients.

A changed Supreme Court makeup could keep the pro-life law in place. In 2016, then-Justice Anthony Kennedy sided with the court’s four liberals to overturn the Texas pro-life law. Roberts and the three other conservatives voted to uphold it.

Now, Trump appointees Justices Neil Gorsuch and Kavanaugh are now on the bench and Kavanaugh, who replaced Kennedy, has usually shown deference to state legislatures to make law.

After oral arguments, Ben Clapper of Louisiana Right to Life told LifeNews he was happy that Louisiana talked at length about how abortion hurts women.

“We congratulate Louisiana Solicitor Liz Murrill on her outstanding defense of Louisiana’s common-sense law designed to protect the health and safety of Louisiana women. Liz effectively articulated the long history of deplorable conditions at Louisiana abortion facilities, which shows that these business cannot speak for Louisiana women. We look forward to the Supreme Court’s decision this summer. It is time the Supreme Court put the health and safety of women ahead of the profits of abortion businesses.”

As the case has progressed, two starling revelations occurred.

In November, the Louisiana Department of Justice announced suspicions about alleged criminal activity that may have happened at the Hope Medical Group. It accused the abortion facility of hiding evidence of criminal and professional misconduct from the U.S. Supreme Court. The state asked the Fifth Circuit to unseal documents in the closely-watched case.

A few weeks later, a Fifth Circuit ruling suggested one abortionist in the state may be performing abortions that lead to second-trimester babies being born alive.

The shocking revelations are reminiscent of the horrors that were uncovered at a Philadelphia abortion facility nearly a decade ago. Abortionist Kermit Gosnell later was convicted of murdering three newborn babies, putting women’s lives at risk and numerous other crimes at his “house of horrors” abortion facility.

Both pro-life and abortion activists are watching the case closely to see how the conservative-majority court will rule. This will be the first abortion case before President Donald Trump’s appointees, Justices Neil Gorsuch and Brett Kavanaugh.

The case will be a good indication of where Chief Justice John Roberts stands on abortion jurisprudence. Last year, Roberts voted with the four liberal justices to block the enforcement of the Louisiana law. However, in 2016, he sided with the conservative justices on the court to uphold a similar Texas law.

Oral arguments are scheduled for Wednesday, and the high court likely will rule on the case in June.

← Prev: Police Officer Prays Every Day at the Flagpole for Students Next: Planned Parenthood: Killing Babies in Abortions is a “Constitutional Right Plain and Simple” →