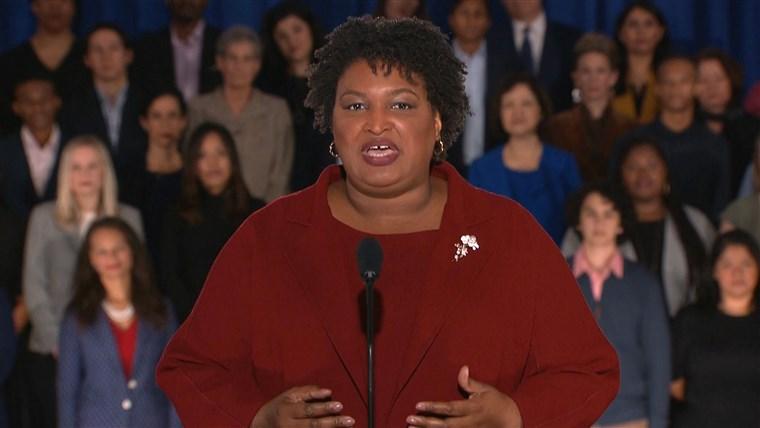 While President Donald Trump spoke about supporting every human life during his State of the Union Address, pro-abortion Democrat Stacey Abrams promoted abortion.

Abrams, a failed gubernatorial candidate from Georgia, gave the State of the Union Response for Democrats on Tuesday, and chose to tout the killing of unborn babies as a necessary freedom.

While Trump slammed the governors of Virginia and New York for promoting abortions up to birth and infanticide, Abrams implied that pro-abortion lawmakers have the moral high ground.

“America achieved a measure of reproductive justice in Roe v. Wade,” Abrams said, “but we must never forget it is immoral to allow politicians to harm women and families to advance a political agenda.”

Abrams did not speak specifically about the legislation in Virginia or New York, but she has not condemned it, as many other Americans have, either. It is more than likely that she supports laws allowing unborn babies to be aborted for basically any reason up to birth. Most Democrat politicians do. It is, after all, a position of their party. The Democratic Party platform calls for legalized abortion without restriction and taxpayer-funded elective abortions.

This radical pro-abortion position is out of touch with most voters, but Democrats like Abrams are trying to sway public opinion by claiming the killing of unborn babies is “moral.”

The liberal outlet Slate praised Abrams for “fram[ing] abortion rights as a moral issue,” at a time when many Democrat lawmakers are pushing to expand abortions.

Though reproductive rights got just a few lines in Abrams’ speech, she cut to the heart of the issue with a winning argument. It is unethical to deprive women of the freedom and access to make informed decisions about their bodies. It is cruel to force women to carry to term a fetus that will only live a brief, painful life or perish upon birth. (As I wrote last week in response to the hubbub around the Virginia bill, third-trimester abortions are performed most often in cases of severe fetal deformities undetectable until later in pregnancy.) And it is a moral disgrace that the party that calls itself “pro-life” looks the other way as black mothers and infants die from a toxic brew of inadequate health care and racism-related stress. To win on abortion rights, Democrats would do well to follow the Abrams playbook: Don’t take the Republican bait on imaginary “moments before birth” abortions. Keep the focus on women’s lives.

That, indeed, is the strategy. Abortion activists want Americans to focus solely on women’s lives because they cannot deny the violent reality about what abortions do to unborn babies. Legislation being pushed in Virginia, Rhode Island, Vermont and New Mexico would allow even viable, healthy unborn babies to be killed by having their limbs pulled from their bodies while their hearts are beating or by stabbing poison into their hearts. No one can disguise this as compassion, so they ignore it.

But the truth cannot be hidden. The Virginia bill was defeated in committee, and at least one sponsor recently dropped his support of the Rhode Island bill. Americans’ outrage has been palpable in the past several weeks. And it’s because we innately know that it is wrong to kill another human being. True freedom never can be obtained by destroying the life of a defenseless child.