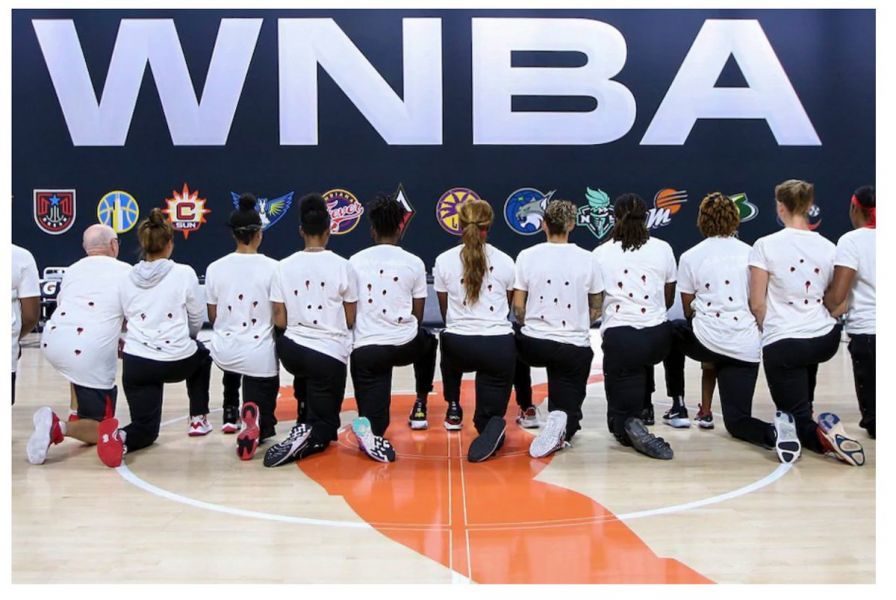 The Women’s National Basketball Association ‘Washington Mystic’ players arrive at their game Wednesday with white T-Shirts with bullet holes on the back in support of the protest against the shooting of Jacob Blake.

On the front of each player’s shirt was a letter spelling out Jacob Blake. Jacob Blake was the man shot several times by a police officer in Kenosha, Wisconson.

Details of a criminal complaint filed by Jacob Blake’s ex-girlfriend have now surfaced, detailing the vile behavior of Jacob Blake previously unpublicized by the media.

In the complaint, which was shared on social media by Daily Wire commentator Matt Walsh, Blake is accused of entering his ex-girlfriend’s home when she was sleeping, allegedly coming into her room and sexually assaulting her.

He then allegedly stole her bank card and her car and fled. The complaint states that Blake allegedly physically assaulted her several times over the years—at least twice a year over a period of eight years.

Details from the Criminal Complaint

LNB stated at about 6AM she was woken up by the father of her children, Jacob Blake, herein known as the defendant, standing over her saying, “I want my sh*t.” As LNB lay there, on her back, the defendant, suddenly and without warning, reached his hand between her legs, penetrated her vaginally with a finger, pull it out and sniffed it, and said, “Smells like you’ve been with other men.”

Officer Raiche reported LNB had a very difficult time telling him this and cried as she told how the defendant assaulted her and then the defendant immediately left the bedroom. LNB stated the defendant penetrating her digitally caused her pain and humiliation and was done without her consent.

LNB stated she was upset but collected herself and ran after the defendant out the front door and then realized her vehicle was missing. LNB ran back inside to her purse, which was on the kitchen counter and checked it, quickly realizing her key to her truck (Ford Explorer 2002), a black individual key and the only key for the vehicle and her Great Lakes Debit Card were missing. LNB immediately called 911 and while waiting for Officers, checked her Great Lakes Account and saw two fraudulent ATM withdrawals on May 3, 2020 that she did not make, both at PNC Bank, 3920Washington Road, both for $500, at an unknown time.

Last Sunday, the day of the incident, Jacob Blake was back at the home of the victim he already sexually assaulted several times. That’s when she called the cops in fear for her life and the life of her children.

Even as the truth of the incident played out shortly after it happened the lie was propagating across the internet eventually reaching the great bastions of social justice. The NBA and WNBA.

As with all liars, the truth is never hidden from them but as their father (John 8:44), the god of this world (2 Corinthians 4:4) truth is meaningless. In other words, they have eyes and ears they can discern what the truth is but they choose to rebel and hold down the truth in unrighteousness. This same template has been played out since the garden.

There’s nothing the devil enjoys more than seeing Truth suppressed with lies. And that’s exactly what the Washington Mystics are doing.

Romans 6:21 makes it clear the only end for perpetual liars is death being separated from God for eternity. Horrors of horrors to even contemplate but these WNBA players walk truth underfoot and rebel against our Lord, Jesus Christ, who is Truth.

‘What fruit did you have then in the things of which you are now ashamed? For the end of those things is death. ‘

‘For when we were in the flesh, the sinful passions which were aroused by the law were at work in our members to bear fruit to death.

Here’s an example of what the Truth can do

Watch and listen and see how fast these Doctors and nurses shut their mouths (guilt) when confronted with the truth.

One of the best pro-life videos ever.pic.twitter.com/xeq7wqmigK

← Prev: Video: President Trump "In America We Don't Turn to Government to Restore our Souls...We Put Our Faith in Almighty God" Next: Russia ‘Magog’ is Paving the Way for a Northern Invasion by Taking Over the Golan Heights →