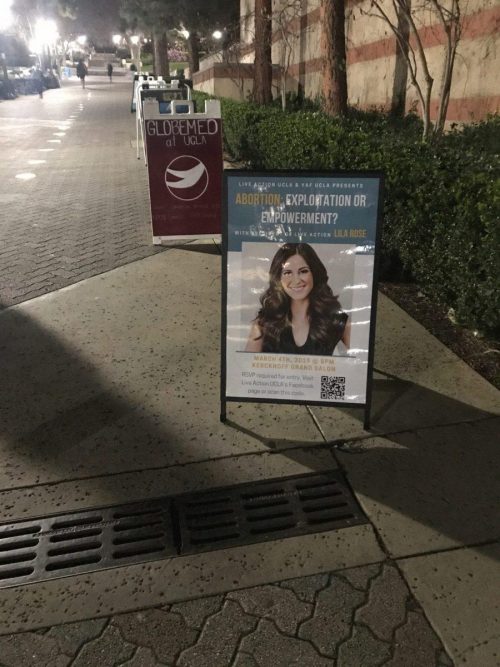 Lila Rose, the founder and president of Live Action, is scheduled to give a talk at her alma mater, the University of California, Los Angeles next Monday, March 4th. The speech is being presented by Live Action UCLA, an on-campus pro-life group, and Young Americans for Freedom (YAF) UCLA. Like other events on campus, Rose’s speech was being advertised on campus at the Bruin Walk with signs and a table manned by members of YAF. But within just days of the signs being posted, they were vandalized and stolen.

Nina Rose, president of Live Action UCLA, spoke to Live Action News about the theft and what this will mean for Rose’s speech and other pro-life events in the future. “To advertise the event, we put out a sign board on Bruin Walk, which is basically the walkway where all the students take to get to class, and it’s very standard for a student organization to put a sign board out, like an A-frame, so we put ours up in a line-up with a dozen other signs,” she explained. “It’s fairly safe; most people just put their signs out there for the year and there’s no problem.”

But there were issues with their sign almost immediately. “We put our sign up on Tuesday, in a metal frame with the sign inside. By the weekend, it had already been stolen,” Rose said. “Somebody basically just stole the sign for Lila’s talk — they didn’t steal the frame, so they just took the sign out of it.” 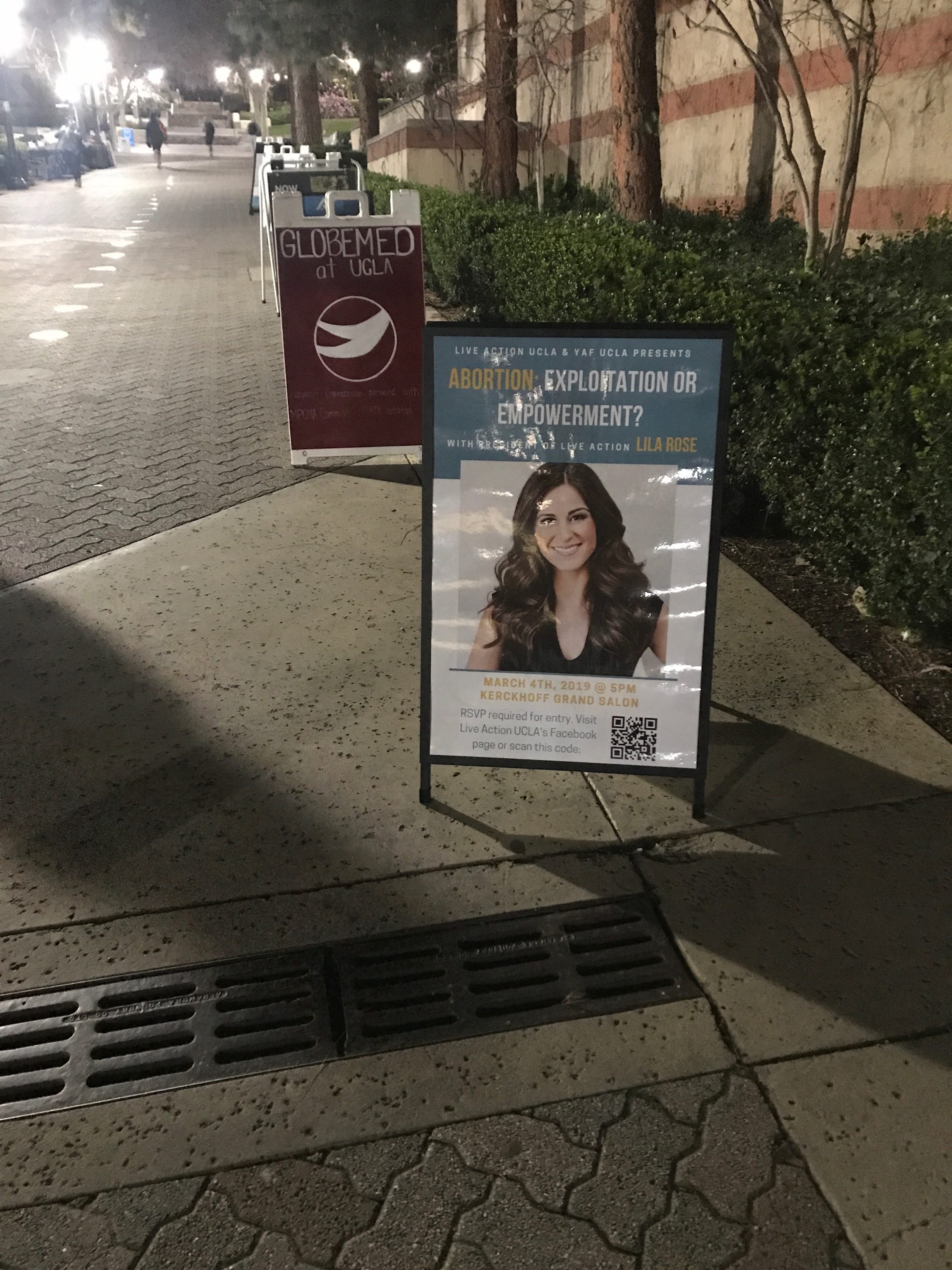 Prior to the theft of the sign, however, there had been problems with people trying to keep students from seeing the details of Rose’s event. “Before that, we’d actually noticed that, as several other members were going to class, people would turn the sign so it was facing towards the bushes, so people couldn’t see it as they passed by,” she said. “That happened several times before it was stolen.”

Monday morning, Rose was told the sign was stolen, and she filed a police report. While police investigate, the sign advertising Rose’s speech has been replaced by general signs advertising the Live Action UCLA club. But that, too, was vandalized. Members of YAF were manning a table to advertise for Rose’s speech when they saw a woman kick over a sign in front of a crowd of students.

The group wrote in a Facebook post, “To the person who stole our sidewalk sign… You probably did what you did out of a desire to protect yourself, or others, from a viewpoint you think is wrong or even harmful. I understand. I get it. But you don’t get to do something that is fundamentally immoral — stealing — to advance your viewpoint. We cannot silence other people’s viewpoints just because we might not agree.”

In the meantime, Live Action UCLA and YAF are lining up security, prepared for the possibility of student protests. “Last year, in the spring, we had Kristan Hawkins [president of Students for Life of America] come speak at campus, and the Refuse Fascism group in LA showed up, and they interrupted, came into the event and were yelling at the speaker, so we had police at that event defuse that,” Rose said. “Because we’re advertising [Lila Rose’s speech] the same way, a Facebook event, sign boards, flyering, we’re expecting there to be protests, but we haven’t seen anything concrete yet.”

While Rose said that she believes the majority of the UCLA campus does support abortion, most of them aren’t as radical about it as the people behind the theft. “This is the first time we’ve put out a sidewalk sign all year, and a couple of days later, it had been stolen,” she said. “And it was turned to face the bushes, and a whole number of things. I hadn’t realized how hostile some people on the campus were until we started putting our voice out there and getting visibility for our club and our events.” But despite the protesting and the hostility, there is no intention of backing down from their fight for life.

“We’re going to keep on running, and keep doing what we do, and fighting for life on campus,” Rose said. “I’m not sure — the people who have been vandalizing our signs — how far they’re willing to go to silence us, but I think for now, we’re just hoping for the best and taking extra precautions, just in case.”