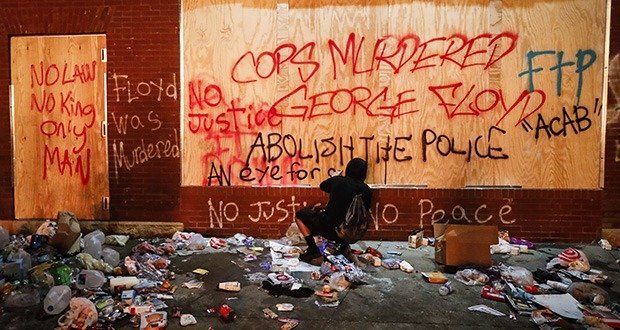 Several members of the Minneapolis City Council want to disband their city’s police force and are investigating how this goal might be realized.

Why would members of a municipal government come to the conclusion that it would be best to disband the police department which would guarantee an all-out breakout of unstoppable lawlessness, chaos and anarchy? Making innocent men, women, and children sitting ducks to the irrational unhinged vile and wicked criminal element. That would take over and destroy everything in their path. Leaving only death and despair. All with no accountability.

The answer is found in Scripture of course, in the book of Romans.

These council members know right from wrong. But instead, rebel at what they know is right and good and change the meaning of “good” too bad and “Evil” too good.   In addition, they know God exists but they reject Jesus Christ and His free gift of salvation and choose to live in their unrighteousness…

I don’t know yet, though several of us on the council are working on finding out, what it would take to disband the MPD and start fresh with a community-oriented, non-violent public safety and outreach capacity.

I hereby declare, officially, my support for ANTIFA

Unless someone can prove to me ANTIFA is behind the burning of black and immigrant owned businesses in my ward, I’ll keep focusing on stopping the white power terrorist THE ARE ACTUALLY ATTACKING US! https://t.co/m6jxtDYmTi

This is the spirit of lawlessness that has been on the earth since the fall. It is only ramping up to unprecedented levels because the return of Lord for His Church is near.

‘For the mystery of lawlessness is already at work; only He who now restrains will do so until He is taken out of the way.’

These city council members, protestors, and rioters know of God as He is revealed in His Creation but they scoff at God, sticking their tongue at God.

‘“ As for the word that you have spoken to us in the name of the Lord , we will not listen to you!’

Scoffing and sticking their tongue at God, offspring of falsehood, children of Satan.

Whom do you ridicule? Against whom do you make a wide mouth And stick out the tongue? Are you not children of transgression, Offspring of falsehood,

Short of their salvation, these are condemned souls who will all face the One they rejected, Jesus Christ, at the Great White Throne. And be tossed into the lake of fire with their father, who will join them at the end of the thousand years.

‘Moreover the law entered that the offense might abound. But where sin abounded, grace abounded much more, ‘

Pray for all, Pray that God opens the hearts of lost mankind to the gospel of grace.

← Prev: Inspirational: Amazon Delivery Driver Prays for High-Risk Baby Next: 48 State-Run Churches Shut Down in One County in Two Weeks →