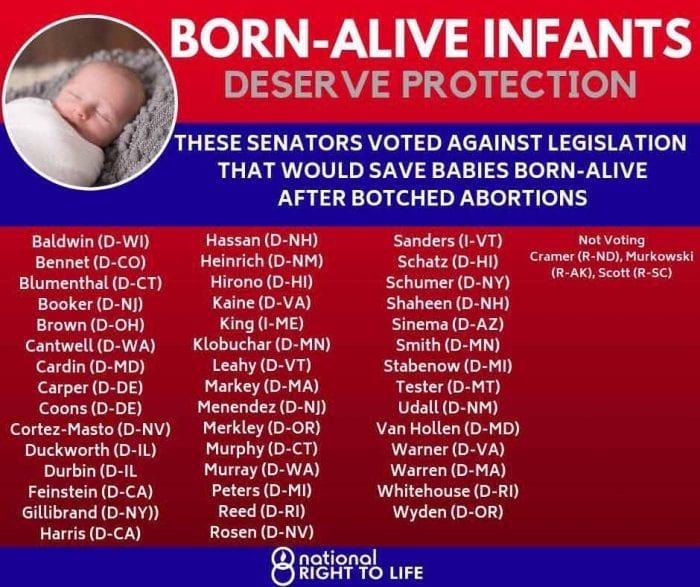 Today, the United States Senate voted on an anti-infanticide bill introduced by Senator Ben Sasse (R-Neb.), the Born-Alive Abortion Survivors Protection Act. The legislation needed 60 votes to pass, and it failed by a vote of 53 in favor and 44 against.  The bill stated that “if an abortion results in the live birth of an infant, the infant is a legal person for all purposes under the laws of the United States, and entitled to all the protections of such laws.” 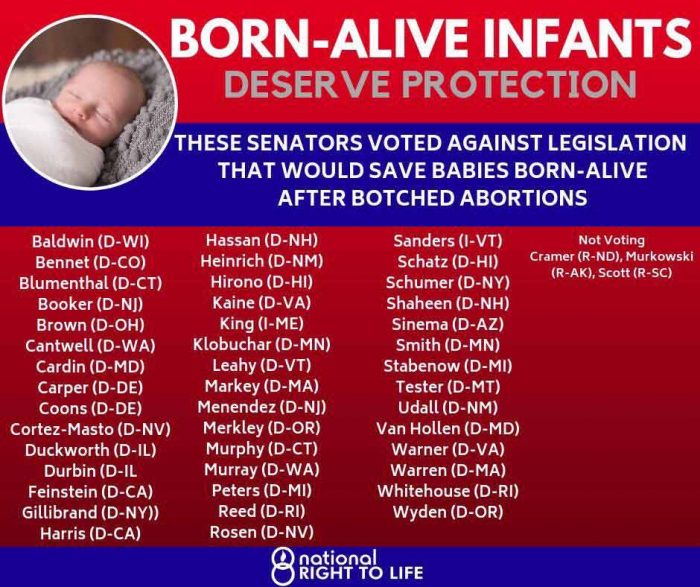 The 2002 Born Alive Infants Protection Act, signed into law by President George W. Bush, established that any child born alive — even as the result of an abortion — is to be legally considered a “person”, “human being,” “child”, and “individual” in federal law. However, that law contained no penalties for those who choose not to follow it. Senator Sasse’s bill included penalties for abortionists who break the law, including a fine and/or imprisonment for up to five years.

The bill would also have allowed a woman to take legal action against an abortionist who breaks this law. The bill states that any child who accidentally survives an abortion must be treated with “the same degree of professional skill, care, and diligence to preserve the life and health of the child as a reasonably diligent and conscientious health care practitioner would render to any other child born alive at the same gestational age” and would make certain that “the child born alive is immediately transported and admitted to a hospital.” In addition, the bill requires the mandatory reporting of violations.

Currently, there are 19 states which afford no protections to abortion survivors. According to the Centers for Disease Control, infants are still born alive every year. Between 2003 and 2014 alone, at least 143 babies died after being born alive during abortions. And according to a press release from Live Action News, “In 2018, 16 infants in Florida alone were born alive after surviving abortion attempts.”

Adult survivors of abortion have formed The Abortion Survivors Network. On the group’s website, it states, “a government report in Canada from 2012 reported that 491 children survived abortions there over the nine-year period of 2000-2009. There’s also this report that identifies 766 children survived abortions in the five-year period from 2013-2018. Additionally, there are similar government reports from the U.K. and states inAustralia.”

Abortion survivors Melissa Ohden, Gianna Jessen, Claire Culwell, and others have spoken out publicly regarding what it’s like to have survived abortions. A group of these survivors appeared on FOX News recently to tell their stories:

Recent polling indicates that just since radical pro-abortion legislation was signed into law in New York in January, more Americans are identifying as pro-life, including Democrats. Other polling indicates that the vast majority of Americans oppose the killing of children who survive abortions. However, the pro-abortion legislators in Congress have largely been deaf to public opinion on this issue.

Live Action president Lila Rose responded to the news of the vote in a press release, stating:

Live Action has documented on camera how abortionists in our country’s notorious late-term abortion facilities talk about survivors of abortion. Washington, D.C. abortionist Cesare Santangelo told our undercover investigators that he would make sure babies “do not survive” if they were born alive at his facility. A New York abortion worker told our Live Action investigator to “flush” the baby down the toilet or “put it in a big” if she’s born alive. In Arizona, an abortion worker told us there “may be movement” after the baby is outside of the mother and that they would refuse to provide help and instead let her die. Dr. DeShawn Taylor, former medical director for Planned Parenthood, told a Center for Medical Progress investigator that identifying “signs of life” after a baby survives an abortion is contingent upon “who’s in the room.”

There is no difference between infanticide and abortion: both kill the same child….

Today should have been a time of unity in protecting life, but instead, Democrats continue to push for the brutality of abortion and infanticide. With Congress failing to do its job, every state should take this issue up for themselves, ensuring care for these innocent children that are often left to die, and work to eradicate abortion altogether.