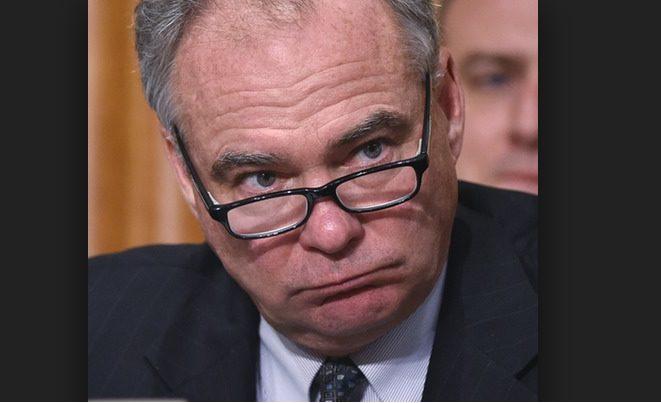 Sen. Tim Kaine (D-VA) received a harsh rebuke Tuesday from his Bishop Barry C. Knestout of the Diocese of Richmond over his vote against the “Born-Alive Abortion Survivors Protection Act” which would have strengthened legal protections for infants born after a failed abortion attempt.

In a joint statement with Arlington Bishop Michael F. Burbidge, Bishop Knestout condemned the Senate’s failure to pass the bill.

“It is a matter of common sense and basic human decency to require, as S. 311 would have, that any health care practitioner present when a child is born alive following an abortion give the same degree of care to preserve the life and health of the child as would be given to any other newborn,” they wrote. “That this bill did not pass unanimously – let alone even pass at all – is appalling and beyond comprehension.”

“We are dismayed and outraged that Virginia’s U.S. Senators Warner and Kaine voted against this critical lifesaving legislation,“ they emphasized.

They urged the Senate to “reconsider its decision as soon as possible.”

Kaine justified his vote by claiming in a statement that the bill was “misleading” and unnecessary.

“I voted against proceeding to Senator Sasse’s bill because the title, content, and stated motivation for the legislation are extremely misleading,” he said. “Infanticide is already illegal in every state. Congress reaffirmed that fact with its passage of the bipartisan Born-Alive Infants Protection Act in 2002. I support that law, which is still in effect. There is no need for additional federal legislation on this topic.”

Despite Kaine’s argument, the bill would have provided stronger protections for newborns than the 2002 Born-Alive Infants Protection Act which ensured full legal rights for infants “born alive at any stage of development.” That measure does not specify a requirement of basic medical care for infants born after an attempted abortion or list any criminal penalties for doctors who do not comply. Sasse’s bill would’ve ensured those protections.

In making the case for his bill, Sen. Sasse’s office pointed out that “currently, federal law does not adequately protect a born child who survives an abortion. On January 22, 2019, New York repealed protections (section 4164 of the state’s public health law) for an infant born alive during an abortion.”

Sen. Kaine has attempted to reconcile his break with official Catholic teaching against abortion in the past by arguing that he is personally opposed to it but doesn’t believe government should get involved.

“I’m opposed to abortion,” he said in a 2016 interview. “I deeply believe, and not just as a matter of politics, but even as a matter of morality, that matters about reproduction and intimacy and relationships and contraception are in the personal realm. They’re moral decisions for individuals to make for themselves. And the last thing we need is government intruding into those personal decisions. So I’ve taken a position which is quite common among Catholics. I’ve got a personal feeling about abortion, but the right role for government is to let women make their own decisions.”

Kaine’s stance on abortion should not necessarily have bearing on protections for infants who survive the procedure, however, he wrote a letter to constituents on the matter last week in which he would not call a newborn who survived an abortion an infant, but used the rather odd phrase of a “fetus who survives an abortion.”

“This bill would establish new requirements for health care practitioners in the case of a fetus who survives an abortion,” Kaine wrote. “I support the right of women to make their own health and reproductive decisions. For that reason, I oppose efforts to weaken the basic holding of Roe v. Wade.”