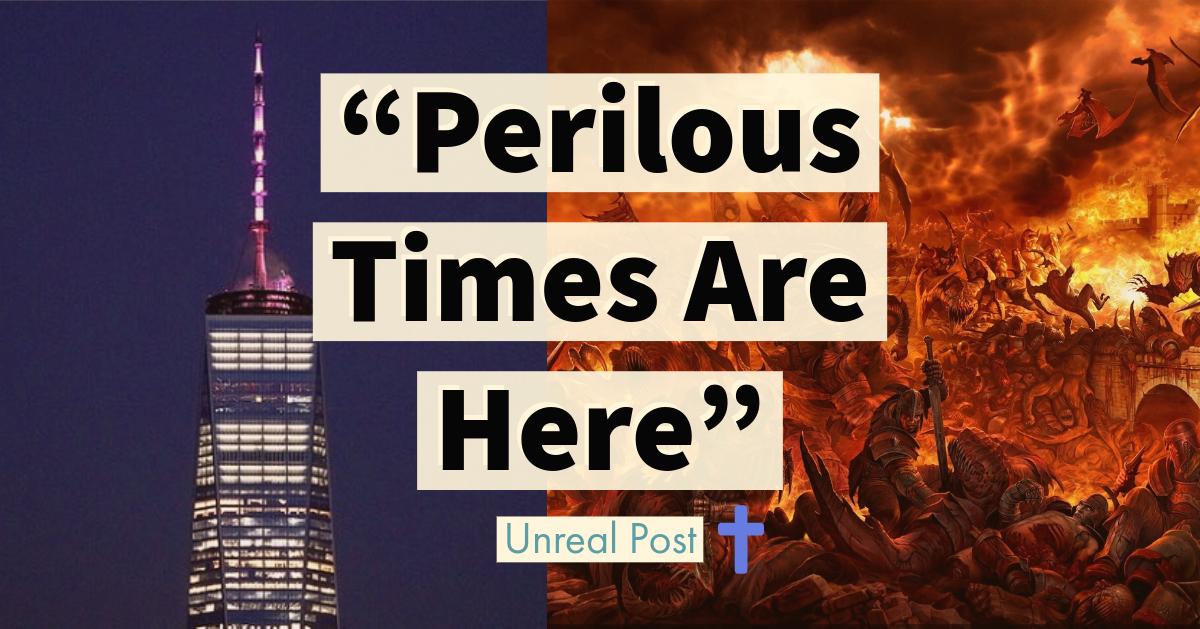 ‘But know this, that in the last days perilous times will come: ‘ II Timothy 3:1

The Most Horrifying and Evil Chapter in America’s History

What’s next, after-birth-abortions? 24 to 48 hours after birth? Of course, that’s coming! It won’t stop until the Lord comes!

I don’t know exactly how it was in Noah’s day but murdering unborn babies at 9 months is where I’d like to think and hope the Father is saying to the Son stand up.

The apostle Paul makes it clear that the Body of Christ, the Church will be snatched up to meet the Lord Jesus in the clouds. (1 Corinthians 15:51-21;1 Thessalonians 4:16)

Then God will pour out His Wrath on rebellious Christ-rejecting mankind.

After the Church is off the scene God will turn His attention to His chosen people the Jews. He will fulfill the remaining 7 years of the 490 prophesied in the book of Daniel.

These seven years are known as the seven years of tribulation. More accurately these 7 years are “Jacobs Trouble” or Israel’s trouble. (Jerimiah 30:7) During this seven-year period, God will pour out His wrath on Christ-rejecting mankind. And fulfill the promises He made to Abraham, Isaac, Jacob, and David.

God’s Wrath will be poured out on the wicked. There will be no escape!

‘Now I saw heaven opened, and behold, a white horse. And He who sat on him was called Faithful and True, and in righteousness, He judges and makes war. ‘

‘Then I looked, and behold, a white cloud, and on the cloud sat One like the Son of Man, having on His head a golden crown, and in His hand a sharp sickle. ‘

‘And another angel came out of the temple, crying with a loud voice to Him who sat on the cloud, “Thrust in Your sickle and reap, for the time has come for You to reap, for the harvest of the earth is ripe.” ‘

‘So He who sat on the cloud thrust in His sickle on the earth, and the earth was reaped.’

‘And at that day the slain of the Lord shall be from one end of the earth even to the other end of the earth. They shall not be lamented, or gathered, or buried; they shall become refuse on the ground.’

Even So Come Quickly Lord Jesus

New York Gov. Andrew Cuomo wasted no time signing a radical pro-abortion bill into law Tuesday, Just hours after the state Senate and Assembly passed it, Cuomo signed the bill, legalizing abortion for basically any reason up to birth in New York state, Rochester City Newspaper reports. The pro-abortion governor gave Sarah Weddington, the attorney in the Roe v. Wade case, a special seat next to him Tuesday evening, as abortion activists around them cheered, the AP reports.
Please read the full article at LifeNews.com

NEW YORK, New York, January 23, 2019 (LifeSiteNews) – New York Gov. Andrew Cuomo (D) directed that the One World Trade Center’s spire be lit pink overnight on Tuesday to celebrate his signing of a law allowing abortions until birth and letting non-doctors commit abortions. The law, the Reproductive Health Act, also erases the state’s recognition of preborn babies older than 24 weeks as potential homicide victims. Cuomo called the bill an “historic victory for New Yorkers and our progressive values.” It was passed on the anniversary of Roe v. Wade, the 1973 Supreme Court decision that brought abortion on demand to every state.

Covington Catholic students Sam Schroder and Grant Hillmann said they’ve been hit with threats of being burned alive and sexually abused, following this past weekend’s March for Life incident. “I was doxed three separate occasions before we posted that video. And the threats, they’ve been horrible,” Hillmann said Wednesday on “Fox & Friends.” “I’ve never heard such cruel things wished upon another human being — ranges from getting locked inside a building and burned alive to sexually assaulted by the clergy members,” he said. “It’s just awful.”

You can read the full article at LifeNews.com

Illinois Gov. Vows To Make Illinois ‘The Most Progressive State’ For Abortion

In a speech praising efforts to ensure women have abortion access through insurance, Illinois Gov. J.B. Pritzker vowed the make Illinois “the most progressive state in the nation” when it comes to abortion. During a speech at a Planned Parenthood in Chicago, Pritzker waxed poetic about a new bill that requires the Illinois Department of Central Management and Services to make sure all the state’s insurance plans for government employees include abortion services, detail this coverage clearly and identify where it doesn’t comply with the state’s law.

Please check out the full article at MRCTV.ORG

If you like this article please consider sharing it.