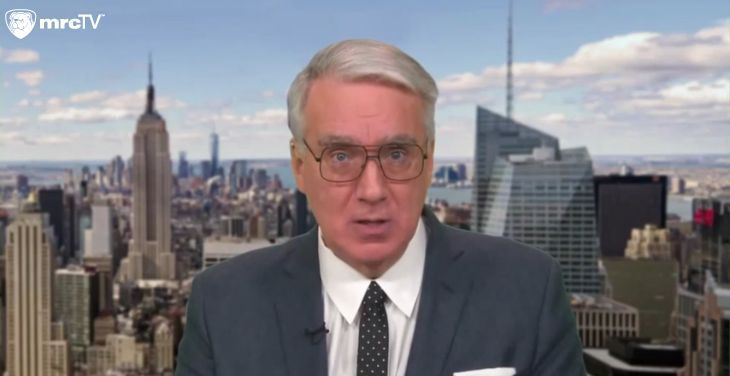 In case you were wondering: Yes, Keith Olbermann is still an unhinged lunatic. The former MSNBC host, former ESPN host is now relegated to making “Worst Person in the World” YouTube videos. Normally, we would ignore them. But his insane rant posted Thursday afternoon deserves to have sunlight shined on it. The bully Olbermann foamed that he wants to “remove” “handmaid” Amy Coney Barrett from society and “prosecute” the “mass murderer” Donald Trump.

Here’s Olbermann shouting hate into the void about “devouring” people like Barrett:

Trump can be and must be expunged. The hate he has triggered, the Pandora’s box he has opened, they will not be so easily destroyed. So, let us brace ourselves. The task is twofold. The terrorist Trump must be defeated, must be destroyed, must be devoured at the ballot box and then he and his enablers and his supporters and his collaborators and the Mike Lees and the William Barrs and the Sean Hannitys and the Mike Pences and the Rudy Giulianis and the Kyle Rittenhouses and the Amy Coney Barretts must be prosecuted and convicted and removed from our society while we try and rebuild it.

This disturbed man was actually given shows on MSNBC and he hosted it off and on for over a decade. The day before, in the October 7 debut of his new set of YouTube posts, he had repeated a lie about Barrett:

A note about the Handmaid Supreme Court Justice. Amy Coney Barrett was not just in the fundamentalist sect that The Handmaid’s Tale was based loosely. She was in fact, her title was, in fact, handmaid, we are told.

She should resign and she should withdraw, but she won’t. Roe v. Wade will have to be protected by new laws or the number of judges on the court changed.

Apparently the secular Olbermann isn’t aware that the term “handmaid” actually predates the HBO show and is used in the Bible. Also, Olbermann is lying. Even Handmaid creator Margaret Atwood said the show is not based on the group Barrett was in.

The title of ex-MSNBC star’s video is “Donald Trump: Mass Murderer Who Will Kill 150,000 More Of Us This Year. This is the kind of stuff YouTube wants on its site?

LifeNews.com Note: Scott Whitlock is a news analyst for the Media Research Center and a contributing writer to NewsBusters, its blog where this item first appeared. Scott’s blogs have been featured in the “Inside Politics” section of the Washington Times and linked to on the Drudge Report. He is a graduate of George Mason University. This originally appeared at Newsbusters.