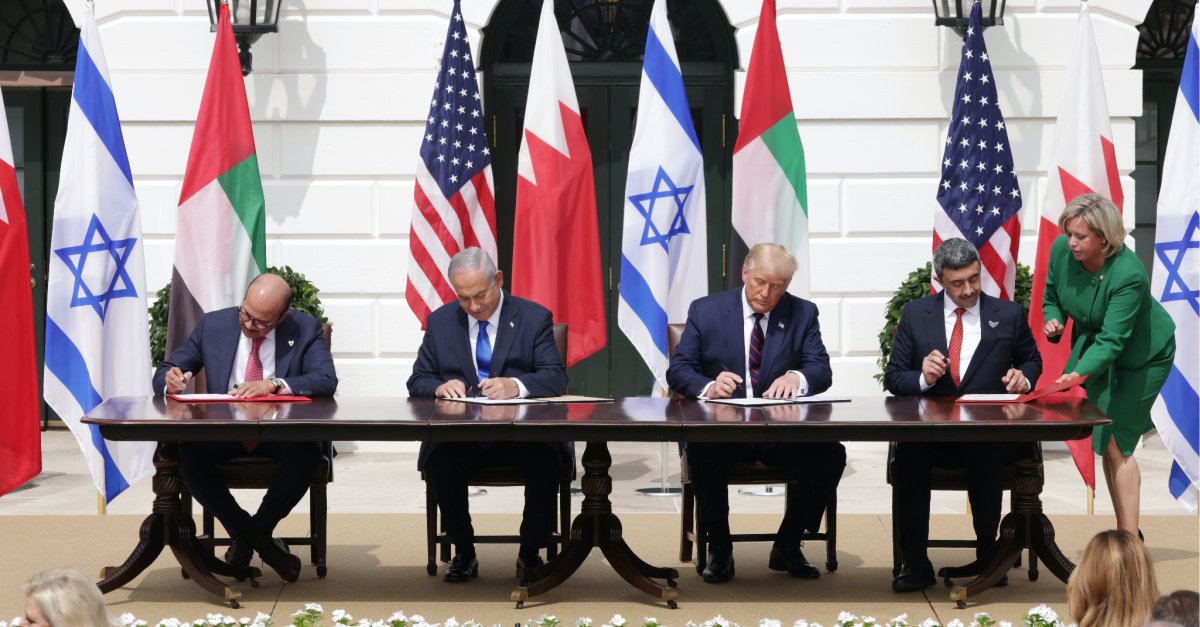 President Donald Trump and Israeli Prime Minister Benjamin Netanyahu met with representatives from the United Arab Emirates and Bahrain at the White House today to officially sign a peace treaty between Israel and the UAE and a formal recognition of ties with Bahrain. “This is an incredible day for the world,” Trump said. “There will be other countries very, very soon that will follow these great leaders.” Trump called the treaty the Abraham Accords, saying it will allow Muslims, Jews and Christians “to live together, pray together and dream together,” the Jerusalem Post reports. In his speech today, Netanyahu also said he hoped to see more countries join the peace treaty. “To all of Israel’s friends in the Middle East – those who are with us today and those who will join us tomorrow – I say, salaam aleichem, peace unto thee, Shalom,” he said. According to the Jerusalem Post, Israel will be signing a peace treaty with the UAE and a declaration of intent to make peace with Bahrain. “After 49 years, Israel and the United Arab Emirates will fully normalize their diplomatic relations,” Trump said in a statement. “Not since the Israel-Jordan peace treaty was signed more than 25 years ago has so much progress been made towards peace in the Middle East.” Nearly 700 people were expected at the signing ceremony at the White House South Lawn, Times of Israel reports. “We worked on it for many years,” Netanyahu said in a statement before the signing ceremony. “This is a tremendous turning point in the history of Israel and the Middle East. It will have a great and positive influence on all citizens of Israel.” UAE Minister of State for International Cooperation Reem Al Hashimy told CNN the “historic” deal with Israel “is an indication that […]

← Prev: "A Must Read": Arizona Department of Human Subjects: What is Your Exit Strategy? Next: ‘Queer,’ ‘Nonbinary,’ Feminist Speaker: ‘All White People Are Racists,’ ‘Born Into Not Being Human’ →