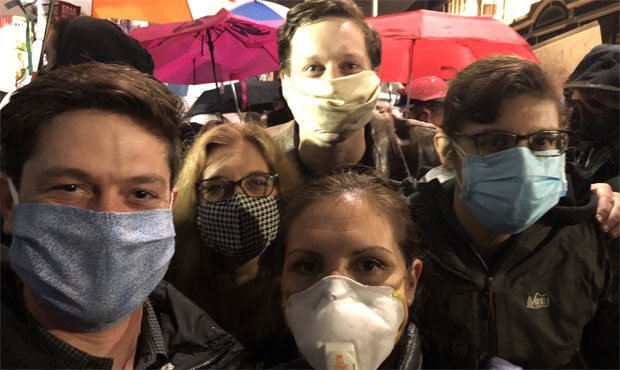 Seattle Councilmembers at Saturday’s protest in Capitol Hill pose for a group selfie. (Councilmember Andrew Lewis, Twitter) At this weekend’s Seattle protest, which turned violent at times, a Seattle city councilmember said the anger from a man threatening to murder cops was justified. On Saturday night, in what appeared to be a coordinated effort, several local far-left politicians descended upon Capitol Hill to taunt the Seattle Police Department’s effort to maintain peace. Councilmember Teresa Mosqueda live-streamed portions of the protest and when she heard violent rhetoric from those around her, she didn’t just downplay them — she claimed their anger is valid. ‘Kill yourselves’ says activist to Seattle cops during protest On Facebook, Mosqueda posted live video near the front of the Seattle protest, just feet away from both a barricade and officers trying to protect the East Precinct from vandalism or worse. As she interviewed various activists, a man with a bullhorn shouted odious messages at the police. “SPD, I need you to do me a favor. Take your guns, put them onto your chins, and pull the trigger,” the man yelled. “I need you to kill yourselves. That’s your only redemption. Go ahead, save us the trouble of tearing you apart and *****ing kill yourselves. Did I stutter? I said ‘k-k-k-kill yourselves.” As this madman shouted, Mosqueda looked at him but didn’t condemn the messaging. “****ing kill yourselves. It’s the only chance you have left to do something good for the world and that’s remove yourself from it,” he shouted. Mosqueda then had the audacity to support the message bull-horned over her. “The anger that you hear is justified,” she said. Telling cops to kill themselves before a threat to tear them apart is not justified. It’s a threat. It’s the kind of statement that if you […]

Click here to view the original web page at mynorthwest.com

← Prev: Arizona's Beast-System: Arizona health department encourages residents to wear masks in public based on a Made-Up Modeling Study Next: Wickedness: 34-year-old UK Man Dies After UK Court Approved His Starvation While in Coma After Surgery →