Pro-Abortion Senator on How to Beat President Trump in 2020: “Punch Him in the Face” 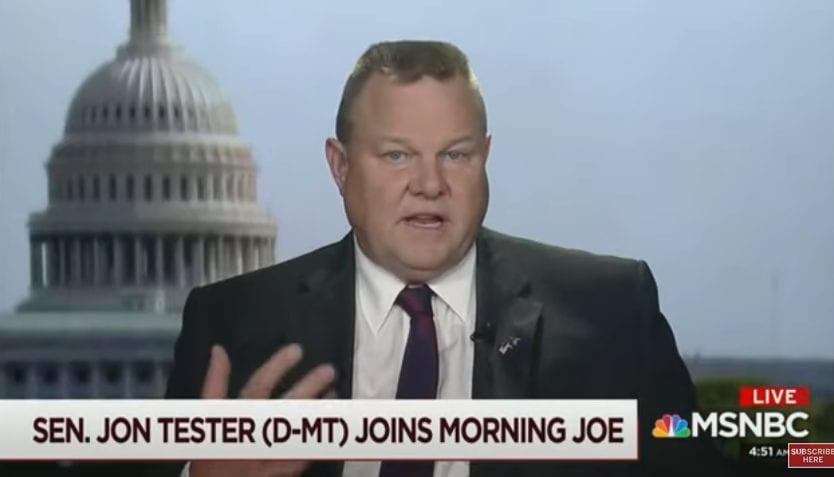 With all of the actual physical violence recently against people who might be right-of-center, it’s bewildering to see a sitting U.S. senator say that the best way to combat your political opponents is to “punch him in the face.” Whether it was meant literally or figuratively, as a member of Congress you need to be cognizant of the fact that morons hear what you say and act because they think it’s okay just because you’re a politician.

Tester joined Joe Scarborough on the Thursday edition of MSNBC’s “Morning Joe” to talk about what could be possible ways to defeat President Donald Trump in the 2020 election.

“I don’t think, even in states where Donald Trump won big, that it did you any good running away from Donald Trump,” Tester told Scarborough before showing his ignorance. “I think you need to go back and punch him in the face. The truth is the guy is bad for this country.”

Watch below for Tester’s comments:

Whether it’s figuratively saying you have to punch Trump in the face, or chanting “send her back” at a Trump rally concerning Rep. Ilhan Omar (D-Minn.) — which Trump disavowed on Thursday — neither instance does anyone any good or is a particularly good look for those that engage in said instances.

Plenty of people dislike Omar, sure. It’s not difficult to understand when you see the freshman congresswoman neither confirm nor deny whether she is a communist or a supporter of the terrorist group al-Qaeda. But, people from all walks of life dislike politicians from all parties.

When it comes down to it, the politicians in Washington — like Tester — thrive off dividing the American people to the point that they think violence is a good answer to disagreeing with those that may be opposite of you politically. Just ask Rep. Maxine Waters (D-Calif.).