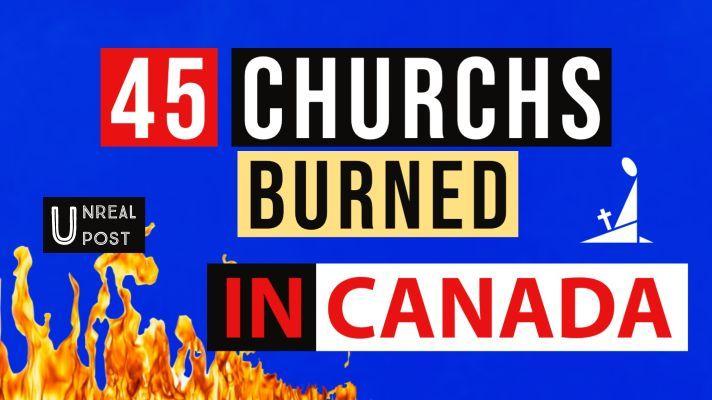 It’s a reality most Canadians only thought possible for Middle Eastern countries like Syria, where ISIS has bombarded and razed dozens of Christian heritage sites in the name of Islam.

Now, after nearly six years of Liberals calling Canadians racist and fanning the flames of hatred, hate crimes are becoming commonplace against Christians in Canada.

Things have gotten so bad that even our American neighbors are beginning to worry.

News reports show that since June, there have been 45 attacks on Christian and mainly Roman Catholic congregations. Of those, 17 of them have been scorched or burnt to a crisp in suspicious circumstances. The fires and vandalism span six provinces and the Northwest Territories, some of which have been in the heartland of First Nations’ territory.

This unprecedented anti-Catholic assault began soon after the unveiling of a residential school burial site in Kamloops, BC which was then followed by more unmarked grave discoveries at a former residential school site in Saskatchewan and elsewhere.

While the mainstream media refuses to call it what it is – a terror campaign – Christians are being forced to defend themselves or hire private security just to protect their holy places of worship.

The sole purpose of this full-fledged assault is to strike fear in ordinary Canadians who simply want to practice their faiths. Far-left pagan groups are using First Nations tragedies to advance their political goals and normalize violence against Canadians.

Despite the deflection by the Liberal media corps, people are waking up to the hateful Marxist ideology shared by these Pagan-terrorists and egged on by Canada’s progressive elites, and fortunately, more evidence is being uncovered to identify these terrorists and bring them to justice.

Now, new footage is beginning to surface revealing what everybody already realized – mostly white far-left radicals are behind these incidents. Video footage by residents from West Kelowna recently captured a masked man tossing burning objects into the dry bush.

Another video from July 2, shows two young women, one blonde and the other brunette splattering St Jude’s Parish in Vancouver with orange paint.

The truth is coming out and it’s time for Canadians to demand justice and an end to the terror.

Please read and support the Counter Signal. They have been providing breaking news on this subject.

The source of the material above is from their article here.

Biblical Commentary “What Saith the Scripture”

As members of the body of Christ, we are promised persecution. Scripture is clear on the subject of the persecution of believers.

‘that no one should be shaken by these afflictions; for you yourselves know that we are appointed to this.’

For to you it has been granted on behalf of Christ, not only to believe in Him but also to suffer for His sake,

As believers, we must stand firm in our faith and in the gospel of grace. After all, it is because of the finished work of the cross by which we are saved.

When believers suffer without being terrified two things are promised number one. It is a sign that God will destroy His enemies (and our enemies are His enemies) but worst of all. They (our persecutors) will be eternally lost, separated from God.

Number two; we can rest in our guaranteed Salvation no matter how much we suffer.

and not in any way terrified by your adversaries, which is to them a proof of perdition, but to you of salvation, and that from God.

Lastly, please pray for our fellow members of the body of Christ in Canada. Pray that the Lord strengthens their faith and may He comfort them through their tribulations.

← Prev: Bloodthirsty China Threatens Japan with Nuclear War - says Japan will Surrender for a Second Time Next: 3,462 Christians Hacked To Death By Muslim Jihadists in Nigeria →