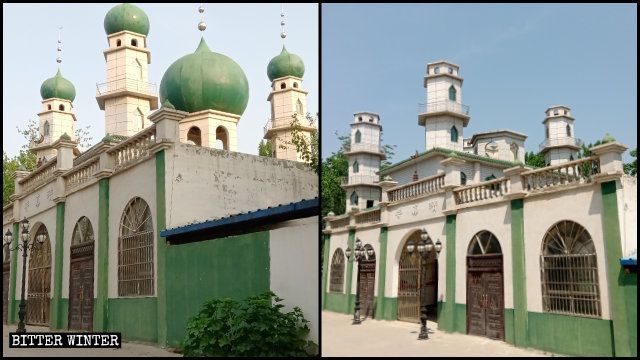 Threatening and intimidating Muslims, the CCP implemented forced rectifications of mosques in Hui-populated areas in Henan, Hebei, and Ningxia.

The central province of Henan, with a large population of ethnic Hui people, has suffered significantly from the CCP’s Islam “sinicization” campaign. The drive to make the province’s mosques look “more Chinese” has not stopped even during the coronavirus outbreak.

According to an imam from Shangqiu city, five mosques were forcibly rectified in the city’s Minquan county in April, following the central government’s orders to “sinicize” over 1,000 mosques across the province. Mosques in Bodang township’s Zhaizhuang village and Huji township’s Zhangzhuang village were among the targeted places of worship. The imam added that officials threatened to arrest anyone who dared to protest or oppose the state’s policies.

“The money would be better spent repairing roads or helping the elderly who don’t have families to support them rather than removing religious symbols from mosques,” a local Muslim said helplessly.

The Wunüdian Town Mosque in Xuchang city’s Jian’an district, with a history of over 400 years, was renovated in 1998 with the money raised by local believers and residents. In April, the Religious Affairs Bureau hired workers to convert the mosque’s domes and star-and-crescent symbols into a Chinese-style hexagonal pavilion.

The government also “sinicized” the Beiguan Mosque in the city’s Yanling county and two mosques in the county-level city of Changge. “When the symbols were removed from the mosque, Hui residents didn’t dare to protest fearing to be arrested, even though they don’t want the symbols gone,” a Han resident told Bitter Winter. “The Communist Party cracks down on Islam using the pretext of ‘Xinjiang’s riots.’ Surveillance cameras were already installed in the mosque.”

On April 4, the domes and star-and-crescent symbols were removed from a government-approved mosque in Jiumen village under the jurisdiction of Shijiazhuang city in the northern province of Hebei. “Over one million RMB [about $ 140,000] was spent: it’s a waste of workforce and resources,” the mosque’s manager told Bitter Winter. “It could have been spent on caring for the people during the epidemic.”

The manager also revealed that the local Religious Affairs Bureau took 30 village and township officials and imams to visit rectified mosques in the northwestern province of Gansu last November. The trip was interpreted as a warning not to interfere with the implementation of the “sinicization” policy. “After their return, the local government ordered the imams to demolish their mosques’ star-and-crescent symbols and convert domes into hexagonal pavilions,” the manager added.

The Xihuan Mosque in Yinchuan, the capital of Ningxia Hui Autonomous Region, underwent “sinicization” in April. An employee in the mosque told Bitter Winter that the government ordered to rectify the building without discussing it with believers. “The rectification is hard and fast,” the employee explained. “Anyone who attempts to stop it will be arrested.”

Before another mosque in the city, the Yinxin Mosque, was “sinicized” on March 11, the government prohibited local Muslims from interfering in the rectification process, banned to share information or even discuss the issue. People were threatened to have their social benefits canceled if they disobeyed.

← Prev: Hundreds of Policemen Sent to Demolish Buddhist Temples Next: Must Raise National Flag and Sing Anthem to Reopen Church →

'Only let your conduct be worthy of the gospel of Christ, so that whether I come and see you or am absent, I may hear of your affairs, that you stand fast in one spirit, with one mind striving together for the faith of the gospel, and not in any way terrified by your...

Transgender is a lie from the pit of hell There is no such thing as Transgender it's called "Gender Dysphoria". Human sexuality is the perfect design by God and binary with the purpose being to multiply the earth (Genesis 1:27; Genesis 9:1). This principle is...

‘The Lord Ain’t Ready for Me’: Oldest Living American Cites Faith When Asked About Longevity

'Rejoice in the Lord always. Again I will say, rejoice!' Philippians 4:4 CHARLOTTE, N.C. — Hester Ford, the oldest living American, is not ashamed to cite her faith when speaking to others about her long life. She believes that she is still here because it is...